The Black Grimoire: Cursebreaker is a medieval fantasy adventure RPG inspired by the ‘oldschool’ atmosphere of adventure games of the past. Journey through a sprawling open world, converse with its many inhabitants and unravel the story of Rothar Aercrest – the cursed lord to the remote woodlands of Imberthale. Increase your power by advancing your skill levels and acquiring powerful items, unlocking special attacks and spells which will aid your way in defeating the worst monsters that lurk in the remote corners of the world. Choose your own playstyle and take your place as the most powerful adventurer to walk the lands!

Tired of ‘epic tales’ of ‘world ending proportions’, Cursebreaker offers stories of human pettiness, revenge and greed - all the good stuff. In this game you're not yet another 'chosen one' destined to save all life from impending doom and gloom. Instead, you're Lord Rothar Aercrest - the feudal ruler to the remote woodlands of Imberthale. Or at least you used to be... 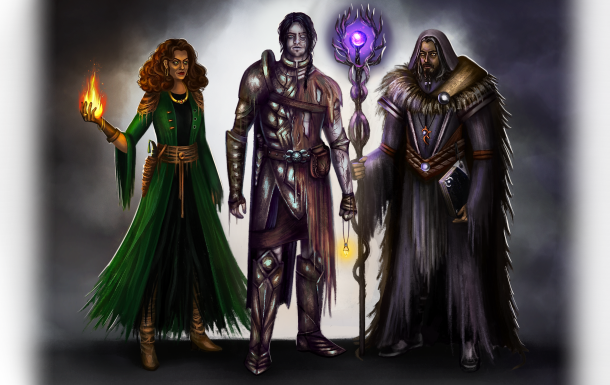 One fateful day your path crosses that of a dark wizard, Gabrius, who appears to be both tremendously powerful and frightfully malicious. Consequently you soon find yourself caught within a mortal feud between two powerful wielders of magic, all the while bound by a curse you desperately need to break free from.

If Lord Rothar is to know peace again, Gabrius must surely die. That might not prove to be such a simple task. After all, what is death besides a mere nuisance to the master of the Black Grimoire?

In Cursebreaker there’s no loading a save from a previous point in a playthrough, so the choices you are presented with tend to be permanent and can’t be taken back. Should you die in combat, you will simply continue at the nearest resurrection point, potentially having lost some of the valuables you may have been carrying. However, under normal settings dying should be relatively effortless to avoid - there are plenty of potions and other tools to guard against it. You may also find scavengers out in the world, who might be willing to sell any lost belongings back to you.

Character progression in Cursebreaker is tied to the various skills you can advance. Every interaction in game tends to give experience in some skill area and gaining higher skill levels will unlock appropriate interactions and abilities. While fighting enemies in close combat, for example, you might expect your Offence and Defence skills to increase. As they do, you unlock new passive and activated abilities, can wield more sophisticated weapon and armor pieces and gain access to new traits from the appropriate trainers.

The spellbook offers a large variety of both combat and non-combat utility. Finding and learning new spells may prove a challenge in itself, and casting more demanding spells will require preparation, such as gathering specific ingredients. Feel free to create your own playstyle by using any combination of ranged and melee weapons and spells!

Chopping trees not only gives you crafting materials but also increases your skill in Woodsmanship, which may give you access to hidden areas in the wild and help you fight beasts. Similarly, you can advance Alchemy by finding and picking special herbs and crafting simple potions, but you will also be able to make bombs, poisons and more.

Every skill should provide you with something unique and be worthwhile to practice. Advancing skills may also unlock hidden options when interacting with objects and NPCs in game. Available skills currently in game include Attack, Defence, Archery, Sorcery, Smithing, Crafting, Tailoring, Alchemy, Mining, Woodsmanship, Fishing and Cooking.

We aim to provide what we call social multiplayer in Cursebreaker; this means you will be able to see your friends and other adventurers online in some areas of the game, but the interactions are limited to social functions only. You’ll be able to chat with them and inspect the equipment they’re wearing, but you won’t be able to trade with them or otherwise engage in gameplay-related activities with them. You can also opt out of the multiplayer in settings if you don't care for it.