“There are three main reasons for Scorchlands to go early access: content, feedback and polish.
While the game is currently in a good state content—wise, we still wish to expand it by adding things that will make the game worth returning to, repeatedly.
It's also important to get to know the opinion about what the game feels like from the larger audience. That type of feedback is priceless and implementing the players clues will make our game even better.
We also want to improve the already existing mechanics and make them as intuitive as possible, especially at the later stages of the game.”

“We're planning to spend one and a half year in early access.”

“Our main focus during the early access is to add even more content to the game. This includes the basics like biomes and progression tiers, but we also plan to introduce extra depth to the game by adding completely new features.
We'll also add quality—of—life improvements that will assist players both in early— and late game.
Another important thing is of course to finalize the story of the game and add more things to do for players to do after its completion."”

“We've got 4 tiers of progression, each coming with a biome, multiple technologies, a combat unit, and a bunch of resources to produce.
In total we're at 4 biomes, 20+ buildings, 50+ technologies, 30+ resources and 4 combat units.
There is also a lighthearted story that accompanies the player throughout the game, but keep in mind that it's not finalized as of now.”

“There is a possibility that the price of the game will increase after leaving early access as we ship new content and features.”

“Getting to know what the players think about the game is extremely important to us. We're planning to set up a direct way of communication through Community Hub on Steam. We'll be also lurking and listening to what people have to say on other social media and keeping people updated with every content update we introduce.” 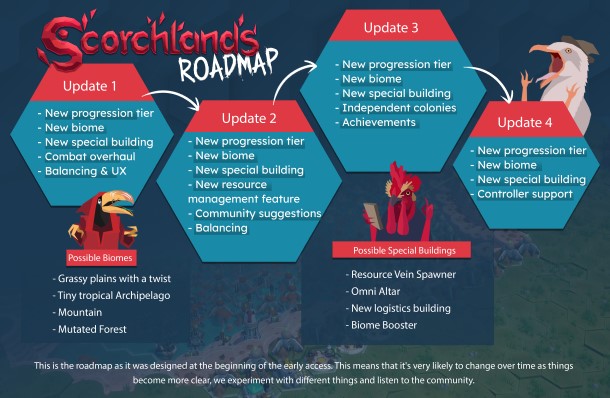 Who says magic and science don’t go along? The birdfolk of Giwi are curious explorers and inventors - what better way to satisfy scientific curiosity than an expedition to the moon?

The volcanic satellite, Helia, is filled with resources, so the daring explorers will not only discover new magical technologies but also harvest riches and establish colonies. Great discoveries aren’t easy to come by - the moon’s surface is full of dangerous creatures waiting to fight for their habitat. The Giwi will have to use magic not only to fend off any predators, but also to sustain their economy with arcane lasers allowing them to handle resource logistics by connecting all colonies into an industrial web.

To fully discover the mysteries of Helia players will have to establish multiple colonies on the moon’s surface, discover new tech and magic, terraform the hostile environment and fight against local creatures.

Scorchalnds is a game in which you manage production of fantastic resources on a foreign, volcanic moon.