“We have brought Main Assembly to a point where we feel it is time to involve our community and let players explore the game. We think it is essential to engage with our audience and gather feedback to bring this project to its ultimate, final form!”

“The final game will have a more refined and smoother crafting experience. Beyond that, we intend to add additional crafting tools and more parts to unleash even crazier creations, more challenge levels to overcome and sandbox levels to play around in.

For more information see our road-map (that will be updated periodically!)”

“There will be some rough edges, bugs, performance issues, and potentially some crashes while you experience:
”

“By engaging directly with our community in any way we can, be it Steam forums, our official discord, twitter, Reddit. We want your thoughts and feedback because we are making this game for you!
We will provide our playerbase with regular work-in-progress beta-builds for the community to test all the latest crazy stuff, as well as more refined main-branch updates.”

Buy Play with your Friends! BUNDLE (?)

“Main Assembly is only really limited by your imagination.”
God Is A Geek

“It is a frictionlessly inventive playground.”
Rock Paper Shotgun 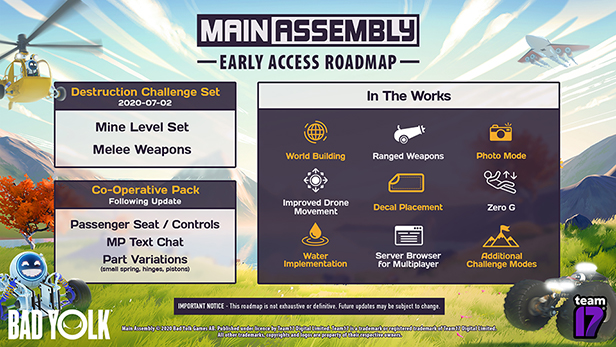 In Main Assembly if you can imagine it, you can create it! You’re the engineer to build, break, destroy and enjoy! Create robots without limitation, cars, planes, or giant animatronics- ANYTHING! Once you’ve built them? It’s time to pilot them through multiple sandbox areas or push them to breaking point in challenge mode.

With a powerful and limitless building tool at your fingertips you can progress from a building beginner to an amazing architect. Every plate, chassis and frame is completely customisable! Tinker alone or enlist friends for your next big project. Build something amazing? Share it in the Steam Workshop!

Like everything in Main Assembly, if you can imagine it, you can create it- including multiplayer fun! Whether you want to chase, race or shove your genius creations in their face, the choice is yours! In sandbox areas you are free to play the game your way. Remember, friends who play together, stay together!

Test your inventions by taking on challenge packs! With increasing difficulty push your creations to the limit by testing their speed, survival, and handling through a series of challenges. Can’t do it? Don’t go nuts and bolts, alter your robot, build a new one or download a creation from the workshop!

In a game where anything is possible- don’t be basic. Every aspect of your robot is customisable from the size, shape to the colour. Think it’s lacking a finishing touch? Stick some googley eyes on it! The robotic-chic doesn’t end there. As you navigate through the world of Main Assembly you take on the role of a spherical marvel AKA a drone, complete with a tool kit of cosmetics!

Now you have a beautiful robot, bring it to life! By using the nodes in the powerful visual programming interface, you can set up controls for your robot. After getting the hang of it, you can dig deep into it and use Sensors to make logic for different types of automation. Or, equip rockets for explosive game play!

Your robots will take damage if they crash, fall, or take a hammer to the face! Advanced destruction systems enable bending chassis and damage that affects robot behavior. But don’t worry, you can iterate to improve and re-spawn your robot to crash it even harder!

Main Assembly uses the Unreal® Engine. Unreal® is a trademark or registered trademark of Epic Games, Inc. in the United States of America and elsewhere