“Working hand in hand with an active, involved community is the best way to create a great game. On our previous game Judgment, we worked closely with the community throughout 2 years of early access with more than 10 updates including substantial changes based heavily on player input.”

“Based on our past experience, between one to two years in order to improve and update the game based on our own vision and community feedback.”

“Expect new mechanics, content and lore in addition to polish and UX improvements. While we’ve already built the core of the game, there’s still limitless potential on what it can become through continued development and community feedback.”

“The game already has tens of hours of content and various systems including city-building and automation, exploration, expansion, combat, equipment and abilities, ruins, research, crafting, and a skill-tree.”

“As we add more features, content, and improve the experience of the game and the time players can enjoy it, we may decide to increase the price of the game before the full release to reflect the greater value players receive compared to the EA version.”

“We are already actively seeking feedback and communicating with our alpha players, be it on Steam forums, our discord channel, or in-game feedback. We will provide regular updates, and keep iterating until both our team and the community are happy with the result.”
Read more
Check out the entire Suncrash franchise on Steam

“My god did it blow me away the first time I played it!”
Drae

“My Favorite Game of 2021. This is a beautiful game.”
BaronVonGames

“It’s a damn good idea. I can sense the tension from here. That knowledge that you can get out of dodge when you need to, combined with the (presumable) pressure of sticking around to gather more resources that make life easier for you in the long run.”
Rock Paper Shotgun 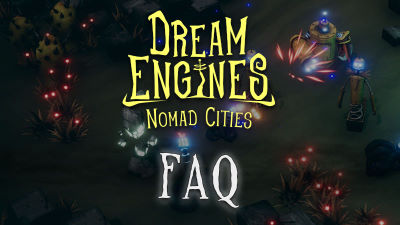 Advanced society is long gone, the world is overrun by the Dream Plagues. The only survivors are small nomadic tribes that don’t attract too much attention. And now, the discovery of a long-abandoned project of the ancients lights a new hope - the flight-capable Nomad Cities.

Your city’s population and economy form the backbone of your survival. Running out of food or resources can be just as dangerous as meeting a Dream Plague in the wilds. Plan and build automated production lines, and keep your people housed, happy and well fed.

Survive until the last moment - then run!

Fortify your city and defend it against raids for as long as you can. But even the ancients were unable to withstand the Dream Plagues forever - the longer you stay, the stronger they become. Unlike the ancients, however, you are able to grab your entire city and just fly away when things become too rough.

Balance expansion and disposable buildings to be left behind

Your city’s area is limited. You’ll have to balance between expensive long-term upgrades to expand your city, and building disposable infrastructure that will be left behind. Carefully choose which buildings you take with you and which you can live without - at least for a while.

Resources are rare, and you’ll need a lot of them to turn your city into a self-sufficient empire. Good thing you can always move to another area when you’ve depleted everything around you. Every biome has an unlimited variety of procedurally generated landing areas, that each have different resources, opportunities, and challenges.

Explore the world with a customizable Steambot

The wilderness is swarming with Dream Plagues. To explore your surroundings, you directly control a unique Steam-Bot in real time action. You will upgrade, equip and customize that Steam-Bot to your preferred play style.

The world is full of ancient ruins and strange mysteries. As you fly and land in different areas, you will discover these places, exploit them, and uncover their mysteries. (Mysteries & Lore not yet implemented).

Research, craft, and upgrade your infrastructure

The ancients used advanced Dream-Tech, most of which is now lost to the ages and to the Dream Plagues. In your flying city you will be able to build advanced research facilities and discover some of these secrets - unlocking advanced buildings and new crafting recipes for your Steam-Bot.

Upgrades to your infrastructure provide permanent bonuses and abilities to best fit your preferred playstyle. Spend hard-earned upgrade points on your Steam-Bot’s combat prowess and raid enemy nests for precious resources, on your city’s defenses to build an impenetrable fortress, or on your administrative and economic abilities to build a thriving, rich, mega-factory.

Carefully manage your fuel and weight

Keep a close eye on your city’s weight and fuel reserves. Being stranded at the wrong moment is a sure way to become extinct.