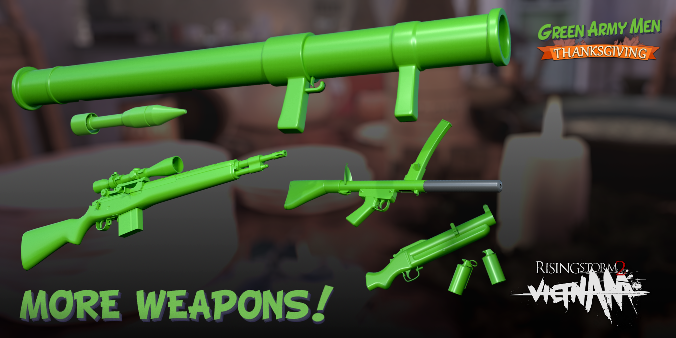 It's Turkey Time! And for Green Army Men, that means a new location for your toy soldiers to fight over. And, of course, some new weapons to use in the fight!

The leaves are changing color, the family is in town and there is a fat turkey in the oven. We all know what that means - the fight for the kitchen has commenced on Thanksgiving Day.

Battle your way across the countertops, air ducts and dining room table as the Green Army Men invade Thanksgiving Dinner. Navigate your way through potato fortresses and wine bottle towers. The winner takes the turkey on this festive holiday map. And take the fight outside as you navigate your choppers around the back deck stronghold and Dad's half finished leaf piles.

Back to School Update 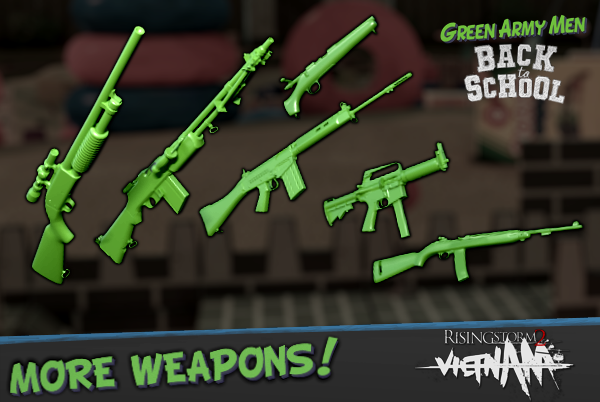 It is just about that time of year again - time everyone went back to school! So, to celebrate (or commiserate) the Green Army Men team has a free update for you, containing a new map and 6 new weapons:

The kids are back to School and we all know what that means : the fight for the playground commences. Battle your way across the Sandbox as the kids take their tests inside the classroom. The Sand buckets have become your bunkers and the leftover popsicle sticks from art class will now build the fortress that you cling to in this epic battle of Schoolyard dominance.

Whether you fly the choppers or call in the napalm rockets onto the final castle objective, there can be only one King of the Sandbox. Going Back to School has never been this fun.

Green Army Men is made entirely by community developers and is now available here as one complete DLC. Please note that everyone who owns Rising Storm 2: Vietnam will also be able to play the base class (Rifleman) in Green Army Men for free - you don't need to own or download this Upgrade DLC to play. However, we strongly encourage you to purchase this Upgrade, as it will give you access to the remaining classes within Green Army Men - AND all the revenue generated from the sale of the DLC will be shared with the Green Army Men team to support their ongoing efforts!

Green Army Men launches from within the main Rising Storm 2: Vietnam client - there are no additional downloads required.

Green Army Men (GAM) is a total conversion of Rising Storm 2: Vietnam, taking you from the jungles and rice paddies of southeast Asia right back to your living room floor. And the backyard, the pool - and the beach! All while playing as toy soldiers. GAM contains:

Toy soldiers need weapons: the GAM team has provided you with a nice long list, now suitably all in green and blue plastic, including: