Nehrim: At Fate's Edge is an total conversion mod for TES IV: Oblivion. is Explore the eponymous land of Nehrim and its dense forests and deserts, delve into ancient crypts and labyrinthine caves, and experience an unconventional, gripping storyline that unfolds beyond good and evil.
Reviews
All Reviews:
Mostly Positive (414) - 71% of the 414 user reviews for this game are positive. (71% of 414) All Time
Release Date:
Developer:
SureAI
Publisher:
SureAI
Tags
Popular user-defined tags for this product:
RPG Action Adventure Free to Play Open World Story Rich Singleplayer Mod Fantasy
+ 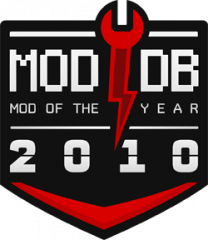 Switch between Oblivion and Nehrim

Nehrim needs to use the Oblivion directory to work on Steam.

The "Run Nehrim Oblivion" option will come up every time you run Nehrim via Steam, use it to switch between both games.

If you want to play Oblivion again: Launch Nehrim on Steam, a panel opens, here you can choose the "Run Nehrim Oblivion" option. The now launched switcher tool lets you easily switch back and forth between Oblivion and Nehrim.