“As a team of five, we have relied on our Discord community since Enemy on Board's first playable prototype, and our early testers have fundamentally shaped our game with their daily feedback. Our Discord is filled with bughunters, and theorycrafters that drive our development and consistently give us amazing ideas. We believe this community-led development is vital, and are committed to utilizing your feedback to best serve you.

Enemy on Board is already fully-playable and filled with unique content. We have added a "Report Bugs" feature in-game if you do encounter anything. We read these reports daily.
Early Access provides us an opportunity to open up our community as we continue to obsessively deepen and enrich the player experience.”

“Enemy on Board will be in Early Access for 6-12 months.”

“The game will remain F2P after Early Access. In the long term, our game will be supported by microtransactions of new crew members and cosmetic content.”

“We have been hosting weekly community events through our Discord and will continue to do so until we have built in-game event features. Our Discord is the best place to find us and we are online and available to answer your questions. We host weekly events for our community.”
Read more

Play Enemy On Board

Buy Enemy on Board - Founder's Edition

Includes 2 items: Enemy On Board, Enemy on Board - Founder's Edition 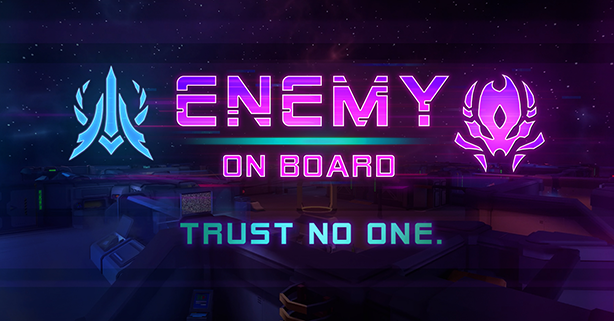 Enemy On Board is an online multiplayer (6vs2) social deduction game where 2 random players are the Alien imposters and the other 6 players are Crew members. The Crew’s goal is to figure out which 2 among them are Aliens, hunt them down, and kill them - all while repairing the spaceship’s generators to keep communication lines open in an effort to escape space isolation. Aliens sow discord, and wreak havoc in order to destroy the Crew members by whatever means necessary. Last team standing wins.

Enemy On Board is a game of teamwork and trust for the ultimate goal: survival. Aliens and Crew both use built-in voice-chat to communicate, and Aliens even have their own second channel to strategize. Just a piece of advice for you...Aboard the Andromeda, it's best to trust no one.

Space is a messy place - even more so when there are 2 aliens among you, that just killed your friends. Tensions can often rise and you just have to whack someone with a hammer. Instead of voting out the Alien impostors - kill them. Don't just trick people - orchestrate a friendly Saturday-afternoon mauling for them.

Enemy On Board is in Alpha via Steam Early Access. We could have kept the game closed or put the alpha behind a paywall and gone F2P later, but we'd rather just get your feedback and build this game WITH you. Updates are released regularly and we plan to operate Enemy on Board for years to come. Our official Discord is the best place to meet friends and share critical feedback with the development team. We sincerely hope to meet you there.