This content requires the base game Miscreated on Steam in order to play.

Reviews
All Reviews:
Very Positive (62) - 88% of the 62 user reviews for this game are positive. (88% of 62) All Time
Developer :
Entrada Interactive LLC
User Tags
Popular user-defined tags for this product:
Action
+

This content requires the base game Miscreated on Steam in order to play.

Entrada Interactive and the entire Miscreated team thanks you for your continued support of Miscreated! The Iron Sons' Cache will provide you with the following extra content: 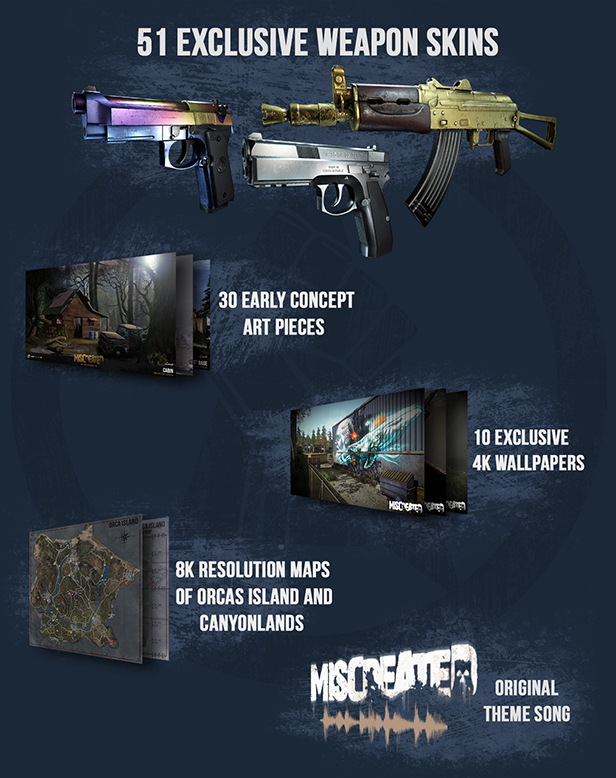 Display your Iron Sons' pride by using any of the over 50 included exclusive weapon skins in Miscreated!


To apply any of the exclusive skins to your weapon, just visit any Amalgamated kiosk in the game and they will be displayed in the Skins tab, then right-click on the weapon in your player's inventory you want a skin applied to.

Enhance the look of your computer by using one of the 10 exclusive Miscreated wallpapers. The wallpapers are all captured at a 4K resolution, so they will look extra sharp!

View 30 pieces of concept art and inspiration boards that were used in the development of Miscreated. As an added bonus, the Iron Sons' logo is also included in PSD format, so you can use it to express your distaste for, and rise up against, the Amalgamated corporation.

The Miscreated main menu theme music is included in MP3 format. The musical score was composed and performed by Anthony Casalena. Both the 1 minute short version and the full 10 minute looping versions are included.

8K resolution maps of both the islands and canyonlands levels. Print them out and post them on your wall!