Waves of the Atlantide

“WotA is a one-man job. I strive to make it the best I can, and I strongly believe in its potential to provide countless hours of fun. Ultimately to reach that goal, I need to involve a wider audience. Early access will help identify the missing bits, nails, painting and polish the game still needs.”

“WotA will remain at least 2 months in early access. If more time is needed and I am able to, I will take it further. I will keep improving the game after the early access period.”

“All features listed in the "About This" section below are in a working state and to some extent, some are already polished.

P2P Multiplayer works with Steamworks lobbies. All in game systems are up and running aside from a few minors cosmetic issues.

AI plays the game just like a human player, it doesn't (and will never) get free units, resources or extra visibility information, as in cannot cheat. It plays very well in the economic and expansion parts of the game and can also defend itself as well as being aggressive. There is still room for improvements yet some players reportedly find the easy AI too challenging for them !

There are no game breaking bugs and so far, I have been receiving great feedback regarding performance.

You can play entire games from start to finish. The world is fully randomized so you can replay to find yourself in different situations and develop varied strategies in response.”

“Yes, I believe in rewarding players who come in early so the early access version is priced cheaper than the release version.”

“I will be watching the community hub, gathering feedback, bug reports and suggestions. I intend to ask/poll the community as often as it becomes necessary based on how things evolve.”

Buy Waves of the Atlantide 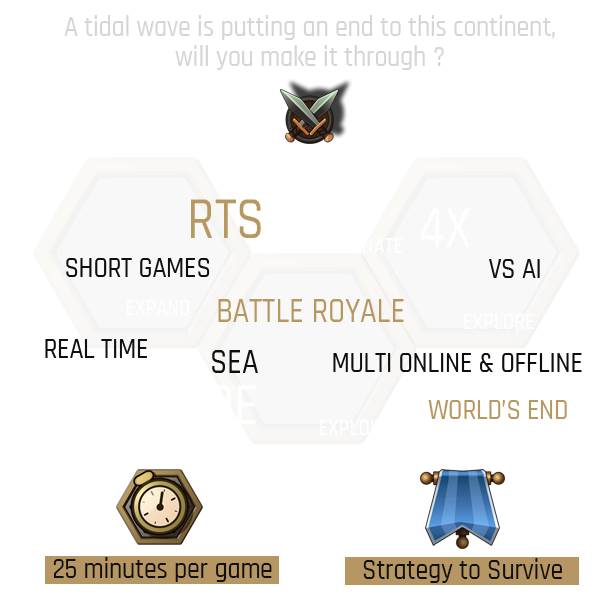 Economic & Technological choices make every games different.
Adapt your strategy to your enemies and to your geographical position.
Gather experience every games and choose your battles wisely.

Find where the ocean and your opponents are to choose where to expand and settle.

World is crumbling, expand fast or let your people be doomed by the ocean.

Build up your economy

During centuries of peace, military strength wasn't a concern to your people, it is now. You have little time and enormous needs so act as fast as you can.

The intellect of your people seems limited only by the amount of resources you're willing to throw at them. Could it be the key to your success ?

You are no longer safe, you will need troops ASAP to send throughout the world to explore, expand and wage war.

It is their fault the world is dying for overusing its resources, put an end to their madness to try and save what remains.

Respect nature, and nature shall not crumble the land under your feet too fast (maybe)