“DwarfHeim is a brand new RTS experience. Releasing into Early Access will allow us to keep developing the game together with our community, seeing what features engage players the most and learning what can be done to make DwarfHeim more fun. DwarfHeim has been in BETA for a few years and it’s become a great game because of the feedback that we have received from our community. We want to continue the dialogue with the community at the same time we’re confident that the game is ready for an early access launch.”

“DwarfHeim’s main game mode, Conquest and other game modes are already implemented and realised.. We want to make sure DwarfHeim is a great playing experience, which is why we don’t want to release from Early Access until we feel it is a complete co-op RTS experience. We hope to have that complete experience by Summer 2021.”

“DwarfHeim has a packed road-map planned. While in Early Access we will be adding a story campaign, a new class and new maps. We have several unannounced features that we can’t wait to roll out to our EA players. Just when you think you know DwarfHeim in and out, we’ll introduce new things that we’ve been planning in our war room.”

“Since the beginning of DwarfHeim's development it has been the pvp mode, Conquest, that was the core of what we wanted to create. We’re pleased to be releasing DwarfHeim Conquest in Early Access which includes four stunning maps, map objectives and a chat option so you can communicate with your team.
In addition, we’re proud to be launching DwarfHeim with three additional modes;
1. Survival that is 1 to 3 players against environment
2. Sandbox which allows you to practice your skills and plan out strategies for future battles
3. Skirmish where you can play against an AI-controlled rival clan”

“As we’ll be adding more content to the game after launching in Early Access, the game’s value is going to increase. We feel that the price should be lower for our EA players to acknowledge those of you who join early and help us tune the additional content we’ll be adding.”

“DwarfHeim wouldn’t be nearly as good without all the hours and feedback already given to us by our community, with our Early Access Launch, we plan to keep delivering new features and content until we, together with our community, are content that DwarfHeim is finished. We already have multiple Discord communities for different languages, in-game bug reporting and we're dedicated to our Steam and Discord DwarfHeim communities and we will continue to work as close as possible with our community to make DwarfHeim better.”

Friend-Pass allows owners of DwarfHeim to invite their friends who don’t own the game yet, to play the co-op mode, Survival, together - totally free. The Friend-pass allows players to introduce their friends to DwarfHeim, and let them try the game before buying!
For more details on DwarfHeim’s friend-Pass check out our Discord Server

DwarfHeim is the next generation of co-op RTS games. DwarfHeim innovates strategy games with thrilling co-op and team gameplay mechanics, where each class depends on one-another to succeed. Choose between playing as a Miner, a Warrior or a Builder and work together to gather resources, expand your city and defeat the constant threat of troll attack. Ultimately, you’ll need to crush the rival clan before they come for you! 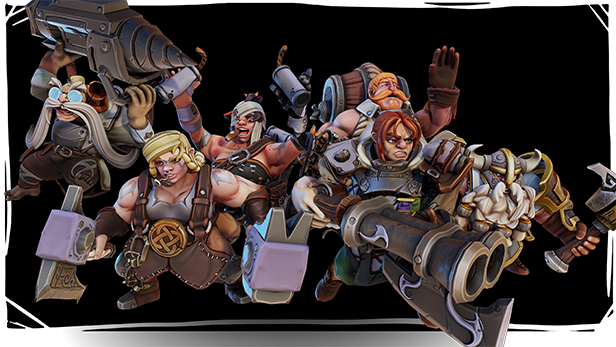 Each class has two powerful heroes to choose from, each with their own specialties and unique abilities. Every Thane has undergone rigorous training, they’re great assets to be utilised for comebacks when a game isn’t going your way! They can even assist other classes with their tasks.

Play DwarfHeim with your friends, either in Conquest mode where your team plays against another team (not for the faint at heart), Survival (VS Environment), or Skirmish (VS AI). All players and classes share the common goal of growing their Dwarven Clan. Develop and expand your settlement together by gathering, sharing and spending resources. Research DwarfHeim’s technologies for all 3 classes, granting buffs, new units and defences (we recommend trying the hearty ales)

DwarfHeim has 3 unique classes to choose from.
Do you prefer to battle it out as a grizzled Warrior, or are you better suited to creating complex underground structures for gathering resources?

There are multiple game types for the player who likes to play with friends, or go solo.
Single Player Modes:
Learn more about our game modes in our community post.

We believe in good old fashioned, home-made produce.
At Pineleaf everything from the code, to the art and the audio is made in-house to ensure that the game lives up to our expectations and yours.