F1® 2019, the official videogame, challenges you to defeat your rivals in the most ambitious F1® game in Codemasters’ history. F1® 2019 features all the official teams, drivers and all 21 circuits from the season. This year sees the inclusion of F2™ with players able to compete in the 2018 season.
Recent Reviews:
Very Positive (367) - 92% of the 367 user reviews in the last 30 days are positive.
All Reviews:
Very Positive (5,106) - 89% of the 5,106 user reviews for this game are positive.
Release Date:
Developer:
Codemasters
Publisher:
Codemasters
Popular user-defined tags for this product:
Racing Simulation Sports Automobile Sim Multiplayer Driving Realistic Singleplayer VR Arcade
+

“Accessible yet unapologetically authentic, F1 2019 is still best-in-class when it comes to the art of bringing a modern motorsport to life.”
85 – IGN

The F1® 2019 Legends Edition celebrates the greatest rivalry in F1® history. Players get to drive as Ayrton Senna in his 1990 McLaren MP4/5B and Alain Prost in the Ferrari F1-90, and face off over 8 race challenges, as well as receiving exclusive Senna and Prost themed multiplayer car liveries. 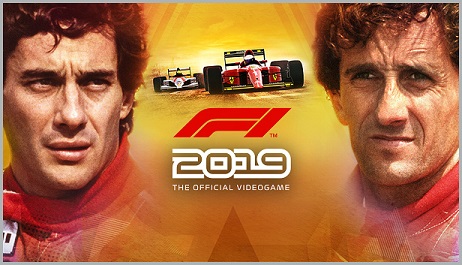 The official videogame of the 2019 FIA FORMULA ONE WORLD CHAMPIONSHIP™, F1® 2019 challenges you to Defeat your Rivals in the most ambitious F1® game in Codemasters’ history.

F1® 2019 features all the official teams, drivers and all 21 circuits from the 2019 season. This year sees the inclusion of F2™ with players being able to complete the 2018 season with the likes of George Russell, Lando Norris and Alexander Albon.

With greater emphasis on graphical fidelity, the environments have been significantly enhanced, and the tracks come to life like never before. Night races have been completely overhauled creating vastly improved levels of realism and the upgraded F1® broadcast sound and visuals add further realism to all aspects of the race weekend.

F1 2019 Game - an official product of the FIA FORMULA ONE WORLD CHAMPIONSHIP. © 2019 Codemasters. The F1 logo, F1, FORMULA 1 and related marks are trade marks of Formula One Licensing BV, a Formula 1 company. Licensed by Formula One World Championship Limited. The F2 FIA FORMULA 2 CHAMPIONSHIP logo, FORMULA 2, F2 and related marks are trade marks of the Federation Internationale de L’Automobile and used exclusively under licence. All rights reserved. © of ASE under license from L&V Licensing Ltda.