“We released the original Amberial back in 2007, and ever since this series has been our biggest passion project. Now, with many more games under our belt, we are in the process of making this the definitive version of the game.

Since the February 2021 Steam Festival, we have been gathering feedback and playing with the community. We have learned that the best way forward is to grow the audience so more voices can take part in building the world!”

“We are creating fresh worlds with unique personalities, developing the lore, building at least 60 more levels, designing many more contraptions, fun collectibles, and adding a few new mini-games like a local versus mode.
The roadmap is fully public and always open to feedback.”

“The current version is fully playable and includes over 50 levels, dozens of contraptions, a complete level editor (that the developers themselves use to make levels) and a basic multiplayer mode . The movement mechanics and core gameplay concepts are all done (after going through months of polish).”

“The price will increase to reflect one more year of development.”

“Most of the community lives in the Discord server, where we already follow players' feedback in improving the game and adding more content. We will also be monitoring the Steam Discussions and Social Media channels.”

In the long gone days of 2007, Amberial landed on the indie Flash gaming scene, and over the course of 4 games accumulated over 2 million players! 15 years later, Amberial Dreams brings the series back with a bang, boasting a brand-new engine, more contraptions than ever before, but the same basic premise: only two buttons to move, no jumping allowed.

The Avatar can only roll left and right, but that does not mean it can’t make impressive feats of traversal! Every surface in the world reacts to you and helps you gain momentum. You can get anywhere you want, as long as you don’t stop rolling.

Amberial Dreams features beautiful and diverse environments where its platforming action unfolds. From bright bubblegum skies to the deepest pits in which you are the only light source, all the way to biomes in which all color has been extinguished. 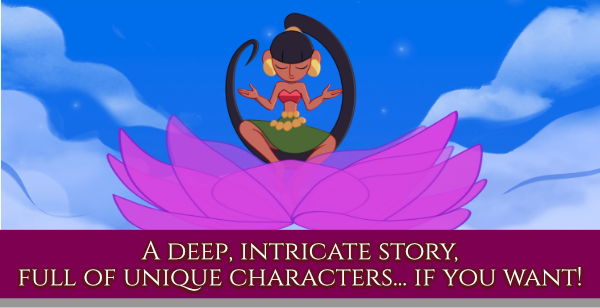 Do you love a good story filled with secrets, lore and unique characters? We’ve got you covered!

Would you rather focus on speed running your way to the top of the leaderboards? We also have you covered!

From the start, we’ve aimed to offer a good experience to all types of players. If you want to experience a sprawling narrative about the consequences of your dreams, it’s right there, presented by surprising characters with partial voice acting and much to tell you. Uncover lore hidden in the environment and understand the secrets of the galaxy of Dew’s Vision.

You’d rather bounce your way to first place in one of our wickedest levels? No problem, just press the skip button when a cutscene starts and move right along, you won’t be penalized, and the game’s open-ended approach to levels will never leave you lost. 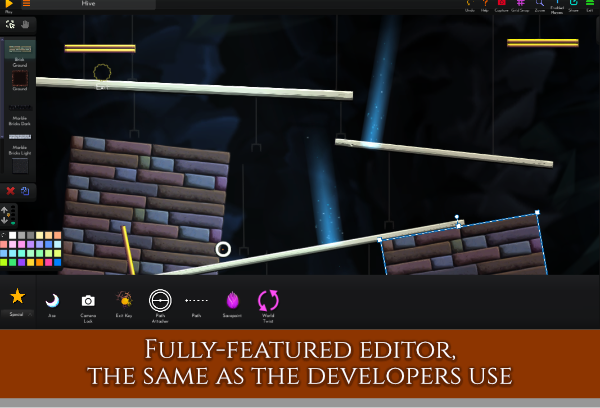 It is our belief that you should be able to build any level we can, and why not, do even better! Our fully featured editor incorporates all game pieces, per-piece coloring, per-piece depth sorting, interactable switches, portals, paths for object movement, as well as convenient features such as multi-select, undo and redo. The editor is constantly updated based on community feedback!

Join our official Discord server! Most of our development is done together with our players. You are the ones we are building this for, after all!