“It would be easy to write off as Rocket League with guns, but it’s it feels like a real evolution of Psyonix’s popular vehicular soccer game rather than an iteration.”

“Axiom Soccer has already been developed to be visually polished and balanced for a challenging yet fun gameplay experience. This is the version you can download and play right now. Our next task is to learn what players enjoy most about the game and to focus on building out the experience to deliver more of that. We're currently anticipating an Early Access period of between 3 to 4 months at this time before we'll be ready to announce a Full Release.”

“Although the game is already fun to play in its Early Access form the full version will offer detailed player progression, much more content to unlock, more play modes to try, as well as different types of competitions to challenge your opponents. These are the aspects we want to involve our community in prioritising, to be sure we are focusing on building what players want most.”

“After extensive Closed Beta testing Axiom Soccer is ready to hit the pitch and play right now. The core game takes the fast-paced frantic action of arena shooters and gives it a fun football twist that our community have had a blast playing. We know there are still bugs and things we can improve and iterate upon but we think fans of shooters and sports games will instantly be able to pick up, play and have fun!

The game already offers:
Online dedicated server multiplayer with Quickplay and Competitive modes.
Up to 6 player online multiplayer
Up to 4 player local multiplayer
Singleplayer progression against tiered AI opponents
3 Unique drones to choose from, each with customisable strips, paints and projectile trails”

“It is our intention to make sure Axiom Soccer is always Free for our community to play and enjoy. As an independent developer we obviously need to ensure we can afford to continue developing the game and will therefore be adding paid content and other premium options in due course. However, we want to reassure our community that this content will always be optional, and where available will not provide any gameplay advantages to players who purchase premium content.”

“Axiom Soccer has been in Closed Beta since September 2018 and our community – mainly through Discord - have been crucial in helping to shape the development of the game by providing us with gameplay testing feedback. For us Discord has become an essential part in the future development of Axiom Soccer, not only to allow our current community to provide feedback but for future ventures such as organising exclusive events and as an opportunity for the players supporting us to have exclusive access to test builds.

We're always open to new suggestions and ideas from our community, so if you have anything you'd like to share with us please head over to our Discord to let us know. We look forward to hearing from you - see you on the pitch!”
Read more

“Viewers are the lifeblood of any healthy esport... Axiom Soccer looks to take that a step further.”
Polygon

“It's Rocket League, right? Well, there's a bit more to it than that... I had a lot of fun.”
EuroGamer

Join us on Discord and become part of the community!
www.discordapp.com/invite/axiomsoccer 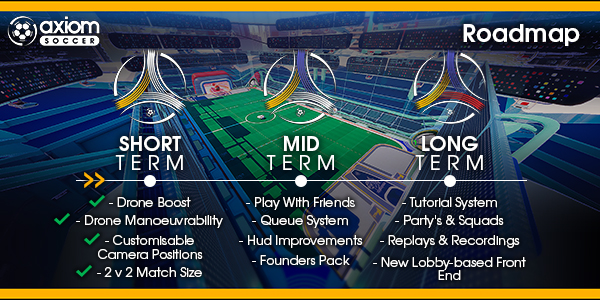 Axiom Soccer is an evolution of the vehicular sports genre combining fast-paced driving with tactical shooting mechanics for a new level of ball control and soccer experience.
With the ability to impact gameplay from a distance using the pneumatic cannon or remote-activated goalkeeper, there is never a pause in play, keeping tensions high and calculated strategy to the max.

Take aim and push your drone to maximum revs.

- High speed flying drones: Simple-to-control drones evolve the genre’s skill, challenging players’ shooting skills rather than their driving ability. Fly to the skies and take the gameplay vertical as you control the ball in the air to blast it down into your opponent’s goal.

- Ammo: A dynamic ammo system constantly forces teams into an attack - defence style, where tactical shots can mean the difference between relegation or promotion. Go all out in an intense firing barrage before dashing back for a tactical defence.

- Soccer-Inspired Mechanics: Controllable goalkeepers allow you to defend from afar and remove the need to sit in goal, attack as a team and defend on the move.
Environmental mechanics add a new layer to gameplay. Use corner bumpers to instantly set up powerful cross shots or block off your opponent’s advance with player-controlled barricades forcing gameplay into the air.

- Intense Competitive Leaderboards: Constantly-updating competitive leaderboards with weekly promotion and relegation brackets, challenge the world and your friends to see who can claim division glory and call themselves Axiom Soccer champion.

- Constantly evolving game: Developed alongside our growing Discord community, Axiom Soccer is constantly updated and improved with the feedback of our players.
Join our Discord at https://discordapp.com/invite/axiomsoccer and talk directly to the development team.