You are a brave space trooper. You are here to destroy a lot of aliens. Your mission is to clear an enemy sector.

If they keep going, fight them as long as you can. There are only a couple thousands of them, so it's not a big deal... probably.

Your company has developed a brand new weapon that absorbs dead enemies' energy and makes you able to kill more and more of them. And you're so lucky to test it.

You have to return alive to deliver gathered results.

Dead enemies drop some microcircuits (if not damaged) that can be implanted into your ship to improve its durability. They can also drop some stolen from humans written-off ammunition if they have some. 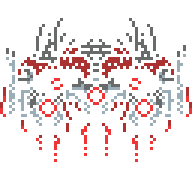 — 5 playable characters: unlock all of your squad members to exterminate every enemy in your sector.
— Challenging gameplay: not so hard, but not so easy!
— 5 epic boss battles: they want to tear you apart into pieces. But can you outsmart them?
— 12 achievements: you can compete with your friends and be the coolest guy!
— Retro atmosphere: pixel-art visuals, chip sounds and music... all of these brings up some nostalgic feelings... probably.
— Xbox controller support: you obviously should try it if you have one!