In spite of a long and hard development before going into mass production, this model was a success for the Lavochkin design bureau and an important step on the road to the best Soviet fighter designs of WWII. The La-5FN began its front-line service during Summer 1943 in the central part of the Eastern front. The La-5FN made a sizable contribution in the fight for air superiority. The main improvements compared to the previous design were: boosted M-82FN engine with direct fuel injection, 180 HP more powerful than the previous engine (1850 HP in boosted mode) and many changes to improve the aerodynamics including a bubble canopy and lowered rear fuselage. Front and rear armored glass sheets protecting the pilot’s head were also installed. The La-5FN was used by many famous Soviet air regiments and many famous pilots, including the most successful Allied ace, triple Hero of the Soviet Union Ivan Kozhedub. 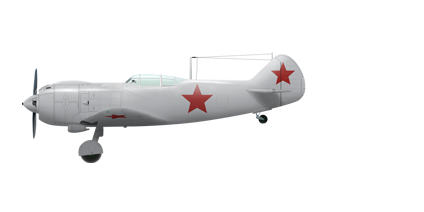