The Supermarine Spitfire is a legendary example of British aircraft engineering and one of the best fighter aircraft of WWII. It flew in Europe, Africa and the Pacific. The first Spitfire Mk.Vs were upgraded from earlier I and II models and were operational in early 1941. A total of 6,641 airframes were produced. More than a hundred of RAF squadrons used Mk.Vs and they were also sent to British dominions and used by other Allied countries. The VB modification was equipped with the Merlin 45 or 46 engine (the latter was better suited for higher altitudes), two 20mm cannons and four 7.7mm machine guns. 143 of them were given to USSR and saw action in the skies of Kuban during Spring 1943. 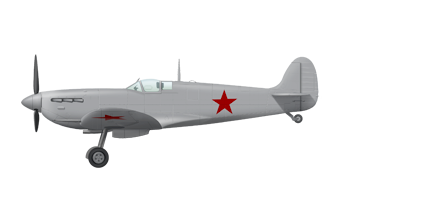