VRITRA COMPLETE EDITION
Developer
Neotro Inc.
Publisher
Neotro Inc.
A challenge from ancient times delivered to gamers. That excitement from the past has returned. The complete version of VRITRA, the 2D fantasy shooting game, is out now!
All Reviews:
Positive (27) - 100% of the 27 user reviews for this game are positive.
Release Date:
Developer:
Neotro Inc.
Publisher:
Neotro Inc.
Tags
Popular user-defined tags for this product:
Action Indie Casual Shoot 'Em Up Bullet Hell Arcade Great Soundtrack
+
Reviews
All Reviews:
Positive (100% of 27) All Time

"The complete edition of the nightmare."

A challenge from ancient times delivered to gamers. That excitement from the past has returned.
The complete version of VRITRA, the 2D fantasy shooting game, is out now!

The seal that was placed by the gods has finally been broken.
Out of the broken seal emerged the Evil Dragon Vritra, feared as the manifestation of the great evil that engulfs heaven and earth.

Vritra's return spawned evil creatures and cast a cloud of despair over the world, bringing it to the brink of total decay.
Sensing the aura of his arch-enemy Vritra, the Hero God Indra clutched the treasure Vajra and headed to Earth.

The countless wars of the gods that have been fought since ancient times is about the begin again. 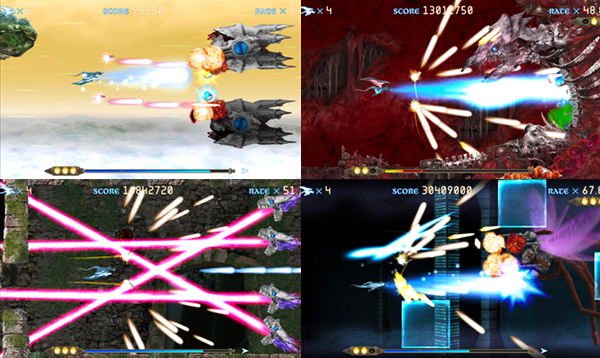 The game features immersive high-definition graphics and impactful sounds that enhance each scene.
This game appeals to players in many ways, with its five stages in total, including new stages that were not in the smartphone version, plus the true last boss that you encounter in Expert mode or above.

Feature 2: A variety of unique equipment

You can obtain items to change the attributes of Vajras. Four new types of Vajras have been added, to a total of eight types. Select the Vajra that will give you the most advantage in each scene, and strategize smoothly.

Only two buttons are used: Shot and Boost. If you destroy enemies using Boost, your rate goes up.
The simple yet in-depth strategizing in this game is what makes it so exciting.

Includes a replay function. Review and share your own replays and use them to strategize as you proceed.
In the Steam version, a total of 16 types of high score rankings are available.

The "Mugen" mode, which was very popular in the smartphone version, is also available in this version!
New Vajras are available to players, improving the balance of the game. How long will you be able to survive?