Take the reins of an underground commuter train as you hustle your way to the top in a city full of hot real estate, cheap entertainment, and a diverse set of metropolitan residents.
All Reviews:
Very Positive (91) - 80% of the 91 user reviews for this game are positive.
Release Date:
Developer:
Departure Interactive
Publisher:
Departure Interactive
Popular user-defined tags for this product:
Nudity Simulation RPG Action Casual Indie Adventure Sexual Content Early Access Survival
+

Hop in the cab of a high-speed commuter train and see if you can keep up with the tight schedule. Your passengers are waiting for you - but watch out for speed traps and terrorists!

Take a stroll through the city and interact with a diverse set of NPCs. Work a side hustle by dealing with consumer goods and illicit substances.

Choose from several residences to rent and live in that each contain unique characteristics. Save money by sleeping in a derelict abandoned basement, or splurge on a two storey penthouse apartment with a view.


The quality of the home you choose is reflected in the usefulness of the amenities found in it, so choose wisely!

Swing by the city club for your fill of cheap entertainment after a long day at the office, where you’ll find high end cocktails, dirty bathrooms, and a hot mess of interactable clientele.

Use your smartphone to manage real estate and finances, as well as play the lottery and order pizza. Don't forget to set your alarm to wake up in time for work! 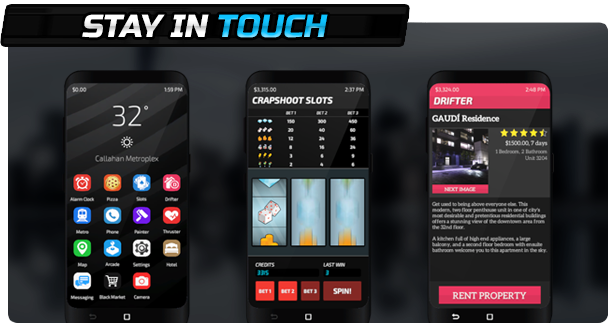