ROMANCE OF THE THREE KINGDOMS XIV 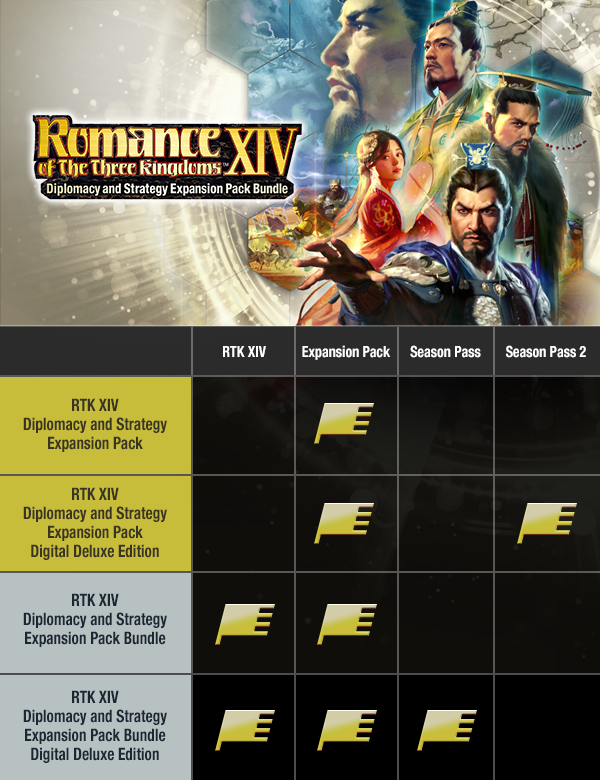 Note: The "ROMANCE OF THE THREE KINGDOMS XIV" game software is required separately.
Note: The game software, Season Passes, and each DLC item are also available for individual purchase. Be careful to avoid making a redundant purchase.

Note: This product is recommended for those who do not yet own the "ROMANCE OF THE THREE KINGDOMS XIV" game software.
Note: The game software, Season Passes, and each DLC item are also available for individual purchase. Be careful to avoid making a redundant purchase.

Note: This product is recommended for those who do not yet own the "ROMANCE OF THE THREE KINGDOMS XIV" game software.

Triumph over the land, take charge of the fate of China! Conquer territories and fly your colors!

A struggle for land where new strategies are born: from points to planes!

The vast land of China is represented a single realistic map, with the characteristics of the land replicated beautifully in CG. The vast map is comprised of 46 cities and approximately 340 regions. The regions are collections of detailed territories, and the struggle for land is intuitively expressed through a color scheme. Players can conquer territories to unite the land and fly their colors more elaborately and more freely.

Administration changes completely by doctrine and a unique policy!

Players can organize the administration, the center of power, as an element that expands the player's strategy. Administration is shown in an organization chart, and as retained officers are added to the organization, various commands and effects are obtained. It is important to make administration that suits your own strategy.

More than 1,000 unique officers, which is the largest in the series, are in the game, and each officer is given a “character” (trait). There are more than 150 characters, with some being useful in battle, some in administration and so on. Some officers possess a powerful and unique character, and arranging the right officer in the right place will help in shortening the path to conquering territories.