WINNER of Retrotalents 2018 at Euskal Encounter

All digital versions also include a Mega Drive ROM file. Purchase the PC, Mac or Linux game and receive the ROM file to play on your genuine SEGA console*, your favourite emulator, or home arcade system.

*using a flash cartridge such as Everdrive

Cartridges are multi-region, and support PAL, NTSC, and NTSC-J consoles.

TANGLEWOOD® is a brand new and original puzzle-platforming game originally released for the SEGA Mega Drive and Genesis, coming soon to Windows, Mac, Linux, Everdrive, and your favourite Mega Drive emulators. A true 16-bit, challenging platforming experience that will make fans of the golden gaming era feel warm and fuzzy.

Set in a fictional world, the game follows a young creature, Nymn, who is separated from home after the twin suns set. Unable to get back to safety, Nymn must find a way to survive the night terrors and make it to morning. TANGLEWOOD’s world is a dangerous one after dark, and Nymn must use skills of evasion, special abilities, traps and trickery to defeat predators.

TANGLEWOOD® is programmed in pure 68000 assembly language, using original development tools and processes from the 1990s. 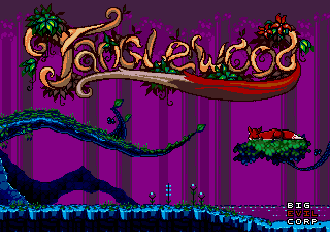 This Steam package also includes a Mega Drive ROM file for you to play on genuine SEGA hardware (using a flash cartridge such as Everdrive), most major emulators, or home arcade setups (such as RetroPie).

TANGLEWOOD® is a registered trademark of Big Evil Corporation Ltd.

TANGLEWOOD® is not licensed, sponsored, published, or endorsed by SEGA Enterprises Ltd, SEGA Corporation, SEGA Holdings Co, or their affiliates.

Big Evil Corporation Ltd is an independent games development studio. This title is an unofficial and unlicensed release for the SEGA Mega Drive console, and is not affiliated with SEGA Enterprises Ltd, SEGA Corporation, or SEGA Holdings Co.

SEGA® and MEGA DRIVE are trademarks of SEGA Holdings Co.