The Ditzy Demons Are in Love With Me

Ren’s virginity is in danger as he is suddenly pushed into the school’s special girl's dormitory full of useless demons. Assigned as an assistant to watch over them, his happy and troublesome days as a teacher for these cute but incompetent demons has begun.
Recent Reviews:
Very Positive (65) - 100% of the 65 user reviews in the last 30 days are positive.
All Reviews:
Overwhelmingly Positive (751) - 98% of the 751 user reviews for this game are positive.
Release Date:
Developer:
SMILE
Publisher:
Sekai Project
Popular user-defined tags for this product:
Sexual Content Nudity Visual Novel Anime Hentai Dating Sim Adventure Mature Cute Demons Choices Matter Multiple Endings
+ Informational
By for UNCUT! January 31

View
all 13
Title: The Ditzy Demons Are in Love With Me
Genre: Adventure

Buy The Ditzy Demons Are in Love With Me

Ren’s virginity is in danger! His childhood friend Riria was frantically trying to take off his clothes and begging to touch him. The truth is that she’s actually a succubus and was embarrassed not having any sexual experience at her age.

He was suddenly pushed into the school’s special dormitory. It was a girls’ dormitory full of useless demons: Yuu, the yuki-onna who was extremely sensitive to the cold; Arle, the mummy girl who is uncomfortable with tightness and loves the feeling of freedom; Emiri, the hopeless angel who has no sense of modesty and who is also his step sister; and, Miyabi, the witch who passionately develops a love drug to bring happiness to the world. The dormitory was built to rehabilitate them and since he was mistakenly moved there, he was assigned as an assistant to watch over them. His happy and troublesome days as a teacher for these cute but incompetent demons has begun. 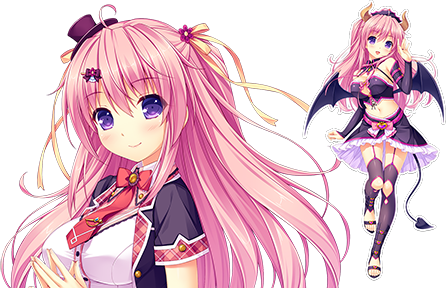 A puppy-like childhood friend with a calming aura. Her parents and Ren's have been friends long before, and she has always been with Ren ever since she can remember. Riria is bad at thinking about complex things, preferring to brush things off with a smile. Surprisingly stubborn once she digs her heels in, and has a tendency to rush into things. Especially in anything related to lewd matters.

Riria is concerned about her childish side, and is also easily embarrassed. Even though she is a succubus, she isn't unreserved; only possessing an insatiable sexual desire for her beloved, but clinging tightly onto her chastity. "Have a succubus as your bride and you'll be blessed with a peaceful family, a happy partner, and wonderful children" is what they say, but her motto is "My rival is their right hand." A succubus's saliva is as viscous as Pepe-rice (rice mixed with pepperoncini) -- time to dig in~

"I don't want you saying other girls are lewder! I'm the lewdest! Geez!" 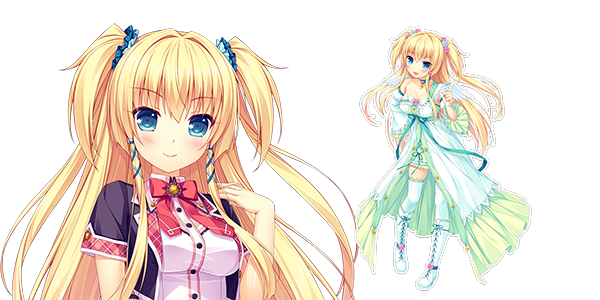 Ren's stepsister with an upbeat personality, and a fallen angel who clings onto her brother. Currently in her first year of school. The two are close enough that they can joke around with each other, but doesn't forget her special sister's privilege of being doted on. A long time ago, Emiri used to be a cupid-inspired idol, but decided to retire when urged to become a variety show idol. Having grown sick of the pure and simple life of an angel, she ran away from home. There she met Ren and grew fond of him, and decided to become his little sister.

With Ren's parents constantly away on long trips, she and him are practically alone. Whenever Ren grows silent, she suddenly barges into his room, or sometimes digs around the tissues in his garbage -- Emiri is quite the busybody. Also, she can apparently inherit the name of Cupid thanks to her family standing, but absolutely refuses because she would "never want some lame name that sounds like mayonnaise". However, her arrows of love as a fallen angel are aimed straight at her brother.

"Even if we're living under the same roof, I've never had a lucky perv moment catching Ren when he's whacking it." 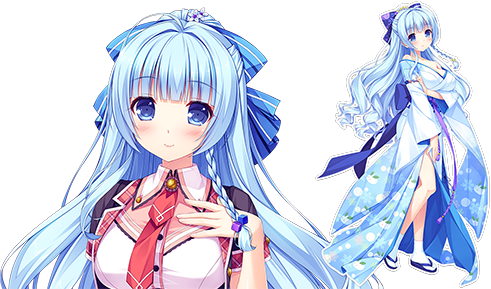 A yuki-onna who is extremely sensitive to the cold, currently in second year. Though she doesn't say much, she likes to talk. Though her expressions aren't very pronounced, she has a wide range of emotions... A girl's heart is complex. Yuu has a strong metabolism and sweats profusely if it gets just a little hot, or eats something even mildly spicy. Even if her face is bright red, she brushes it off as "nothing", but her obstinacy quickly gives way and she gives up honestly.

Yuu gets the chills quite easily from lower temperatures and likes to cling onto Ren, but whenever she starts sweating, she gets a little moist and sticky, and her smell and sensations get rather arousing. Also, even though she looks pretty frigid, she's actually heavily into pleasuring herself. Despite having lived in an isolated yuki-onna village, she can use computers and other modern devices perfectly. Sweaty and voluptuous... she's also a real perv in that sense.

"It's still so cold even in July. Share some of your warmth with me. *hug*" 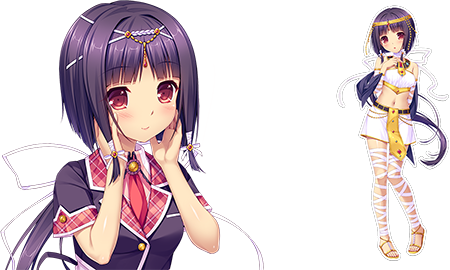 A very polite, very serious, very methodical, very rational mummy girl; first year. She doesn't like tight clothes on her body however, and apparently doesn't wear clothes at all. Even without clothes, her skin is incredibly sensitive, and she cannot walk comfortably because she's conscious about the clothes she's wearing. Although it's embarrassing for her because she finds it physically disagreeable, she has no choice but to tough it own whenever she goes outside. On a side note, having bandages wrapped around themselves is the formal dress for a mummy; in these modern times, only traditional families still wear them.

At school and in the dormitory, she takes care of pets as the sole member of the biology club. She feels at ease because animals don't care about being naked or not. Arle also can't sleep right with a different bed or pillow, so she brought over her personal coffin from her home. The coffin is fully equiped with both power and air conditioning: perfect for the ultimate lazing around. 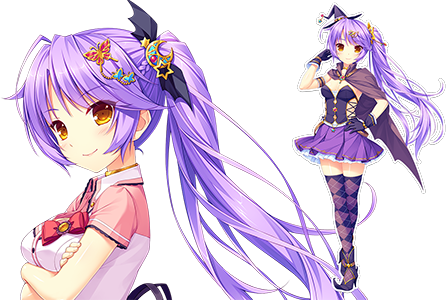 An older sister type of girl who intends to succeed her family's pharmaceutical business, currently in her school's third year. Refreshing and candid, she is sports-minded and would rather charge into things head-on rather than think about them. Miyabi takes good care of people regardless of who they are so she's quite popular. Rather famous, in fact, as she also does modeling work for magazines on the side. Her abilities in sports are so great that she's often asked to help out in the sports clubs, but her academics are catastrophic. The way she formulates medicine is rough and imprecise, so her parents are also against her becoming a pharmacist. That her studies are so terrible that it's practically impossible for her to get national certification provides some relief for her parents.

Concerned about the declining birth rate and issues of infertility, she believes that if she can develop a drug to boost energy and vigor, then the world can be a happier place. She tries to create her own original drug for that through learning by imitation, but fails and becomes a victim of her own aphrodisiac medicines. As a result, she has a lot of experience in self-pleasure. By the way, she prefers inserting her fingers inside.

"Haven't you thought of how many people could be happy if there was a super drug that can supercharge your vitality?" 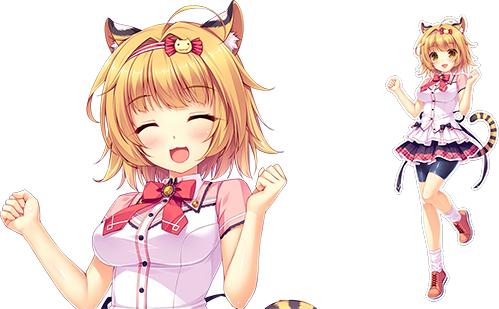 A serious and straightforward kind of underclassman of the Tigerkin race, in first year. An athletic and super mega positive girl. To the point where she should maybe take a step back once in a while. Lovable idiot. On full moons, she's supposed to turn into a were cat, but only her tail and ears can change. She goes to the school to conquer this. Brimming with curiosity, she normally dashes around and about, causing a ruckus. She, Emiri, and Arle are classmates and good friends, and are often together.

Rin works part time at a convenience store so she doesn't cause her family trouble; she loves the bentos that are about to be thrown out from expiry. There are tears when she has near-expiration bento for lunch, but if it's barbeque bento then the happiness continues 'til the next day. When a tiger enters its mating season, it's said to mate over a hundred times in a period of two days. It seems that she isn't an exception. Her lower lips get really lose thanks to her ancestors' markings.

Tiger Girl who can only change her Ears and Tail
Race: Tiger Girl
Height: 153 cm
Three sizes: B83 / W54 / H85
Blood type: B
Birthday: August 31
Likes: Fishing, hard bar snacks, going to the sea to fish for food on her days off 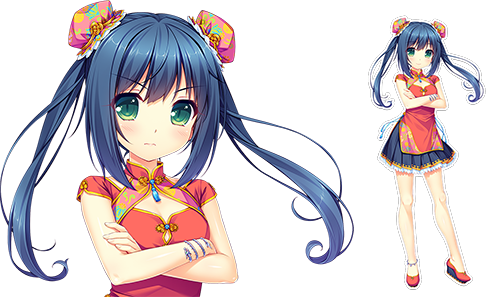 A teacher whose short height is matched by her lack of maturity. Though she looks perfectly nice and cute, her insides are a swirling mass of cynicism and neuroses. She has an uncanny ability to pick up when someone makes fun of her, and her temper is exceedingly short. But her anger is also quick to abate, so everyone pretty much loves her. Though she comes from a distinguished family, she's quite the bungler and her parents call her a rotten fruit. Her grandfather spoiled her when she grew up, however, so she ended up like this.

Aifa of course doesn't do her job at all, but she doesn't do the chores either, instead immersing herself completely in games and anime. Still, her body is maturing as it should for her age, with her youthful parts down there loosening up somewhat. Even for someone of a demonic race, her woman's body sure is full of mysteries.

"If someone here says I became a teacher thanks to connections then it's hell for the lot of you!" 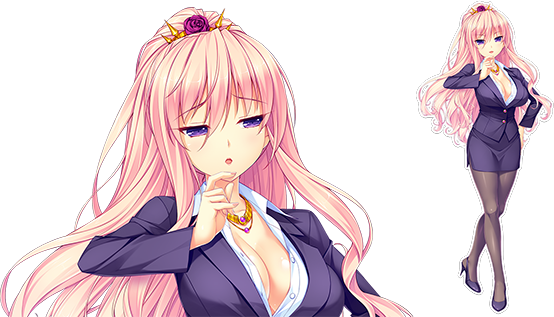 Reika is both Riria's mother and something like Ren's foster parent, as well as the headmaster of the school the two attend. She's also the bridge between this world and that, taking care of the exchange students. Though curt and a straight shooter who doesn't mince words, she isn't by any means unfair. In fact, many people look up to her for as someone to rely on.

Her daughter's feebleness rather annoys her, and she does want Riria to become a great succubus. Also, her sexual frustration is building up because her husband hasn't come back home in a long time. Because succubi are incredibly devoted in their service, she finds herself very troubled as she can do nothing but wait impatiently.

"A virgin wouldn't understand this deep love and all this other stuff, you dumb girl!"