XRC - Next Reality Contest 2017
Winner in the category Interactive Entertainment

“Townsmen VR is still in an early stage of development, but already offers a great experience – Early Access gives us the opportunity to share our progress with the players and receive crucial feedback to help develop a game they want to play. This direct feedback is essential in judging which gameplay mechanics work and which don’t, but most of all, it allows us to shape the game according to the players’ expectations.”

“The duration is entirely dependent on the reception of Townsmen VR, we are however aiming for approximately one year of Early Access. The game is already fully playable at this point and internal testing has been an ongoing process for the last months to ensure there are as few bugs as possible and that the balancing provides an enjoyable experience.

While we do have a lot more ideas for the game, we would like to ask you to only buy the game if you would like to play it as is – not based on what it might someday become.”

“The greatest benefit of Early Access is the ability to closely examine what players like about our game – so, we will shift our focus in response to player feedback. This, of course, means that we can’t make definite promises in terms of changes to gameplay or content.

Over the course of the Early Access period, our goal is to increase the number of playable islands, expand on the economy (more buildings, jobs, resources) and in general add to the depth of the game. Again, however, while more content would be great and there are a lot of ideas we are excited about, we can't promise any additional features. Please buy Townsmen VR only if you want to play it in its current state.”

“The current version of Townsmen VR has all of the core mechanics in place to allow for an enjoyable gameplay experience.

Currently, players can play on one island, build up their economy and fend off bandit attacks. The game offers many different buildings, resources, and jobs as well as an elaborate tutorial featuring the loyal companion Sir Clunkalot. In addition to roughly 2 hours of standard gameplay, players can spend many more hours creating and interacting in this exceptional VR sandbox.”

“We plan to moderately raise the final price in accordance with the feedback we receive and the changes and additions to the game that are made over the course of Early Access.”

“Community feedback is one of our primary reasons for releasing with Early Access which is why we will closely monitor and follow discussions in the Steam forums. We would like to encourage everyone to participate in discussions surrounding already existing or most wanted features. The amount of player feedback we receive will shape the future of Townsmen VR.”
Read more
Notice: Requires one of the following virtual reality headsets: HTC Vive, Oculus Rift, or Windows Mixed Reality. See the VR Support section for more info.
VR Only

“...it could be the genres most promising title thus far.”
Preview – Upload VR

“...a game where you can interact with just about everything.”
Video Preview – GrayStillPlays

Build a medieval village within a completely interactively simulated world!

Lean back, relax and watch the bustling life of your villagers or actively get involved to speed up processes and move workers and resources directly where they are needed. You are able to seamlessly change between the all-encompassing view of a god and the detailed view of a citizen, able to follow the colorful life of your village. There is a lot to discover! But watch out for the Black Knight’s plundering hordes!

The game is currently in Early Access. We are excited to hear your feedback and ideas to make Townsmen VR an even better virtual reality experience in the future! 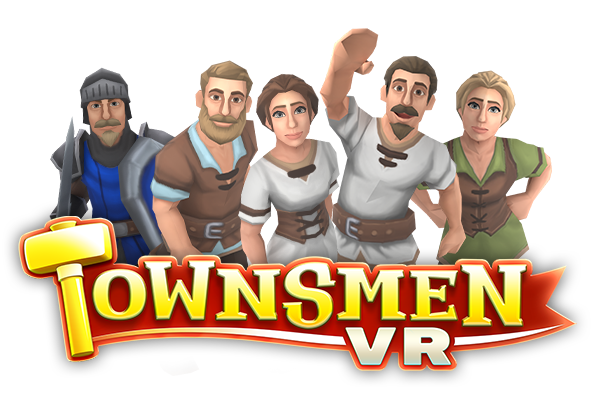