Check out the entire Offworld Industries franchise on Steam 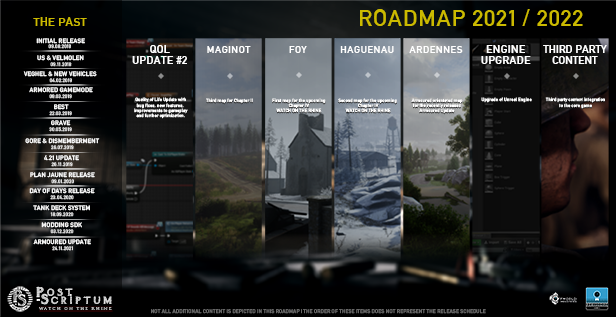 Experience the intense campaigns that were Operation Market Garden, Plan Jaune (Fall Gelb) or Operation Overlord which stretched across farms, woods, villages and city areas of the Netherlands, Mountains and rivers of Belgium and shores of France. Whether you’re jumping out of a plane, arriving in a landing craft by sea, resupplying friendlies or operating a tank, you will find multiple reasons to drop back into the battlefield in this grand scaled representation of a WW2 setting never explored in a large multiplayer environment.

Post Scriptum will cover multiple theatres in the form of chapters, with the 1st Chapter “The Bloody Seventh” being the original setting in Operation Market Garden, it covers the 1st Airborne, 82nd and 101st Airborne, the 9th Waffen SS and the Wehrmacht, with over 40 vehicles, 9 maps. The 2nd Chapter “Plan Jaune” covers the Invasion of France in 1940 and features the French Army as well as the Wehrmacht of 1940, dozens of new vehicles, 2 new maps with a 3rd still coming. The 3rd Chapter "Day of Days" which will cover the Invasion of Normandy in 1944, features new factions like the German Fallschirmjägers and US 4th Infantry, each with new vehicles and a few new weapons, and with 2 new maps and a 3rd coming later, which adds to the already large selections of maps. Included in this new Chapter is a new game mode "Invasion" which puts a twist on the original game mode "Offensive".

In Post Scriptum, teamwork is paramount to achieve victory. Enrol as the commander and order gun runs or artillery to support your team, play as one of the many infantry roles, join a logistics section and fortify the battlefield with fortifications and emplacements and resupply the frontline or be one of the armoured crew members and crew a tank. Communicate with our in-game VoIP with your squad or use the local proximity fade to talk to players nearby to help the flow of battle.

Armoured vehicles played a tremendous role in WW2 and were feared due to their destructive nature. Join a tank section with 3 other players and crew multiple accurately modelled steel beasts as the driver, gunner or commander. Every vehicle features realistic values such as turret speed, armour thickness and type of rounds. Calculate the range of an enemy vehicle and shoot at its internal components to disable or destroy them.

Immersion is one of the fundamental key elements in Post Scriptum. Experience the authentic reproduction of an incoming Stuka siren or artillery cannons firing from afar. The piercing sound of an incoming heavy round cutting through the air past you. The cracks of bullets and shrapnel. Any kind of caliber, any kind of damage to body and steel, the soundscape and visual fx were thought out to the tiniest detail to make you fully immersed in the battlefield.

Post Scriptum is a game about war and as such features several depictions of violence.

The game also features depictions of mutilation in form of limbs being severed from the body.