“As the sole developer of Mercury Fallen, early access is a great way to support the project and build a community of players that can assist in its development through feedback, reporting and exposure. The game has already benefited greatly from community feedback and through Early Access I hope to continue to grow the community as the game evolves. Join the adventure and help make Mercury Fallen the best it can be.”

“The game is very playable and enjoyable, but there is still ground to cover with new content and updates. As a sole developer it's challenging to properly estimate how long it will take to get to final release. I'm dedicated to releasing regular updates to the game and improve gameplay and content until final release.”

“The focus of Mercury Fallen is building and exploration. Many of the core elements of building and management are in place, but will continue to be expanded upon. As development continues more focus will be put on exploration with additional discoveries, planet surface content and story elements.

“The game has many hours of content and has been enjoyed by many users. The game contains many of the core elements that will continue to be added upon. In the current version of the game, the player can mine and grow resources, refine materials at crafting stations and expand the facility with additional rooms, machines and decorations. Manage colonist quirks, ailments and customization options. Explore and exploit the planet surface. The focus of the game is to build, expand and explore.

Players can manage power/water distribution, resource management and more. The game has a solidly playable and enjoyable foundation and I will add even more great content.”

“The game will most likely increase in price after early access.”

“Most games are only as good as the community behind it. As a single developer, it's not always easy to address all individual concerns, but I am eager to communicate with my audience via email, community forums and social media. I do my best to listen to player feedback and deliver on what makes sense for the game. I also involve the community in optional test versions of the game before main game updates.”

The game is in the early access alpha stage and is not yet feature complete. Please read the Early Access info at the top for more details.

Mercury Fallen is a sci-fi colonist management game created by a solo developer. After being sent to a distant planet, a group of colonists awake to find that their stasis capsules have malfunctioned causing them to oversleep. The once-new facility has fallen to ruin.

Rebuild and expand the colony, grow crops, build structures, recover technologies and discover lost secrets to ensure the survival of your new home away from home.

Deconstruct the ruins and mine for resources. Construct rooms and various equipment for producing materials, robots, power, water and managing colonist needs. 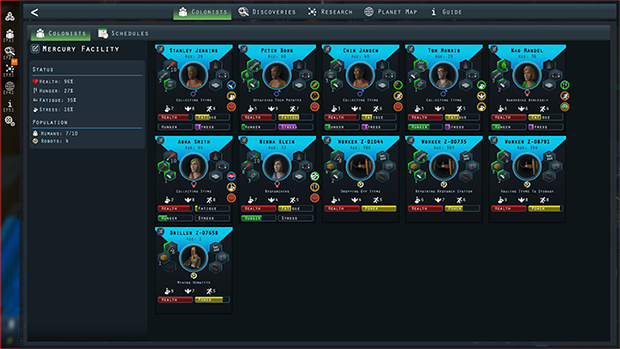 Manage your colonists’ needs by designing and constructing sleeping, recreation, dining areas and more. Each colonist has unique quirks that affect their behavior in various ways. Manage colonist schedules to ensure they stay happy and motivated. 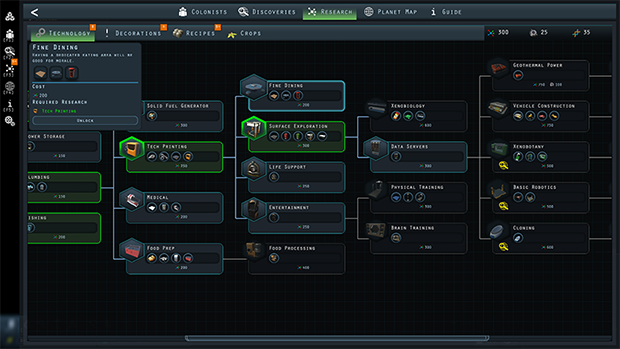 Send out expeditions to explore points of interest for resources and discoveries. Construct vehicles and structures to exploit surface resources.