Roboquest is a fast FPS Roguelite in a scorched futureworld. You're a rebooted Guardian, ready to kick some metal ass! Fight with your buddy or by yourself and annihilate hordes of deadly bots in ever-changing environments.
Recent Reviews:
Very Positive (115) - 93% of the 115 user reviews in the last 30 days are positive.
All Reviews:
Overwhelmingly Positive (1,123) - 95% of the 1,123 user reviews for this game are positive.
Release Date:
Developer:
RyseUp Studios
Publisher:
RyseUp Studios
Popular user-defined tags for this product:
Indie Action Roguelite Co-op FPS Early Access First-Person Online Co-Op Fast-Paced Great Soundtrack Shooter Robots Roguelike Action Roguelike Singleplayer
+

“Because we want to involve you in the development process in order to fine-tune the game, whether that means gameplay modification or metrics balance tweaks. EA is one of the best ways to enrich the game with community feedback as the development is ongoing.”

“We expect Early Access to last between 8 to 10 months, but could be more, depending on working pipelines, delays and the amount of feedback you give us.”

“The full version will contain more game content.
That means all biomes, loadouts, weapons, enemies, bosses, upgrades, meta-upgrades, cinematic and story elements.
In addition, we expect the game to be more balanced thanks to your help during EA.
There should not be major gameplay changes or feature addition.”

“The Early Access features most of the final core systems of the game, with a few cinematic and story-elements.
It contains around one third of the final game content: 5 biomes, 3 loadouts and their upgrades, 40 weapons, 20 enemies and 2 bosses.
We’ll push additional content over the course of EA.”

“The final price will be more expensive than the Early Access price.
The price of EA may increase throughout its development, based on the amount of content we push in the game.”

“We expect to build a strong community on the official Discord server (discord.io/Roboquest) and listen to all your feedback there. We won't be implementing every suggestions but we'll be monitoring and keeping an eye on the most requested and reported things and implement the ones we deem the most promising or interesting.
We will also ask your opinion about specific work-in-progress things such as weapons, balance, loadouts, bosses so you can give us your input while we're working on something.
We may create other communication channels if we see fit.” 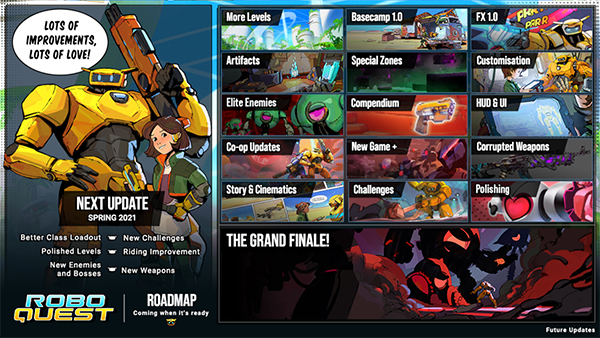 Roboquest is a fast-paced FPS Roguelite, playable in solo or 2-player co-op. Jump into the steel shoes of a high-powered, hyper-mobile robot and fight like you’ve never fought before.

Run through randomly generated environments on an unrecognizable Earth. Scorched canyons and vivid cities packed with secrets, upgrades, and enemies.

Destroy every laser-shooting evil bot and boss that stands in your way, choosing from an arsenal of handcrafted weapons to do so.

Gather powerful technology to help you push forward. Upgrades, abilities and customization for your character and basecamp. They’ll stick with you after each defeat, to make the next run a little easier.

The year is 2700. Humans live scattered through the desert, struggling to survive. It’s looking pretty bleak.

Until a young scavenger girl named Max stumbles across something that may help. An old Guardian robot, lying abandoned in the sand. She reactivates him, knowing that with a Guardian by her side, she may be able to give mankind a fighting chance…

Together, the two begin to explore the mysterious canyons that surround them, searching for answers and a way to survive.

There’s just one problem. The canyons are crawling with evil bots, determined to stop them from advancing. But who’s controlling them? And what are they guarding within?

Play the Guardian as if he were an extension of your own hands. Controls are fluid and highly responsive. Nothing gets in the way of your battle dance.

You’re fast. Like, really fast. Mastering movement is vital for progression - jump, dodge and annihilate enemies before they even know what’s hit them.

The feature that makes a Roguelite so challenging. No checkpoints. Prepare to keep fighting until you master a level, with persistent rewards to push you further each time.

The game serves up fresh, organic 3D environments at random to keep you on your toes. Each run will feel different from the last. Be ready.

From the very first fight, you’ll be able to choose from several loadouts of Guardian, each with their own playstyle and abilities.

Every loadout comes with its own bundle of unique upgrades for the Guardian, so you can further customize how you play.

If you want even more choice than that, you can always create and customize your own loadout. Bring down the bots any way you like.

Roboquest fully supports gamepad use (some parts of the game and some interfaces might require the use of a mouse for the duration of the demo and during development).

Uncover secrets spread out across the game, to gain rewards and piece together parts of the story.

Join the community on Discord!