Step into the shoes of Lyric, the humble innkeeper in a quiet mountain village, as she reflects upon a lifetime of poignant memories, heartwarming friendships, and bittersweet choices — proving along the way that you don't have to slay dragons to be the hero of your own story.
All Reviews:
Very Positive (72) - 98% of the 72 user reviews for this game are positive.
Release Date:
Developer:
Wayward Prophet
Publisher:
Wayward Prophet
Popular user-defined tags for this product:
Adventure Indie Early Access RPGMaker
+

“A Story Beside is launching as an episodic Early Access title so the community can get involved and help polish the game before full release. As a solo indie developer, it's nearly impossible for me to find every issue and squash every bug before launching to a wider audience, so this is a great way for eager players to get their hands on the game early and help out with its development. I'm planning to release new chapters on a regular basis, allowing time in between for feedback and last-minute fixes as the story unfolds.”

“Full release is planned for Spring 2020. If you'd rather wait until then to experience the full, final story, no problem!”

“When the final game launches it will contain all completed chapters and features. This full version should also be more streamlined and polished than the Early Access build, thanks to feedback and suggestions from the community.”

“Currently, the first five chapters of the game (around 4-6 hours) are available to play. The purpose of the episodic release schedule is to allow players to focus on one chapter at a time, both in terms of digesting the story and offering feedback to be implemented in the final game.”

“The game's final price has not been determined and may see a slight increase upon full release. In this case Early Access players would save a little money by jumping in now!”

“Releasing chapters one at a time will allow plenty of time and opportunity for communication between myself and Early Access players. I'm hoping the community will offer suggestions regarding controls, mechanics, graphics, story, characters, music, and everything in between as we near the full release together.”
Read more

Buy A Story Beside

Imagine that for every epic adventure, there was A Story Beside.

A Story Beside is a narrative-driven fantasy adventure game experienced through the eyes of an ordinary girl. Step into the shoes of Lyric, the humble innkeeper in a quiet mountain village, as she reflects upon a lifetime of poignant memories, heartwarming friendships, and bittersweet choices — proving along the way that you don't have to slay dragons to be the hero of your own story.

Expect gameplay full of meaningful choices, charming characters, sweeping romance, and emotional storytelling inspired by games like Life is Strange and To the Moon. 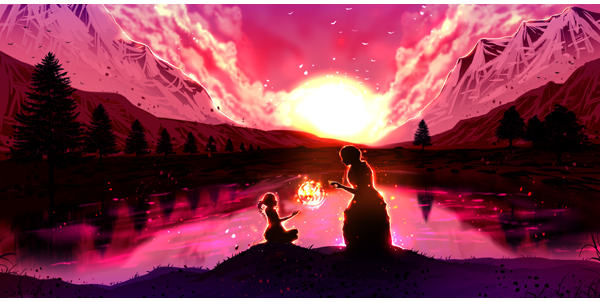