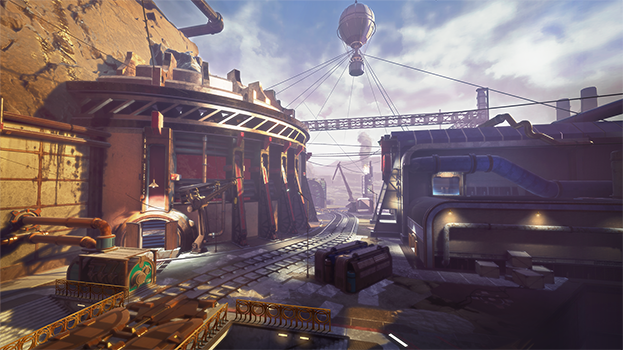 CityBattle | VirtualEarth is getting several major updates in the upcoming weeks! Daily login rewards, daily quests, totally new steampunk map, epic skins and more!
Join the army of your republic and pilot your robot to an ultimate victory!
Have fun playing!

CityBattle - is a battle of thousands of cities for dominance. Become a battle robot pilot in the army of your virtual city in a free-to-play session-based MMOFPS on Unreal Engine 4. Participate in intense 5 vs 5 battles, upgrade your robots, play in tournaments, create different tactics and ultimately rule a virtual city or republic!

CityBattle - is a free-to-play game with fair monetization. There is no pay-to-win mechanics, there are no lootboxes with random rewards and all classes receive levels simultaneously without the need for endless experience grind.

Use unique upgrades system for modifying each class of robots and create a war machine that ideally fits your playstyle. Each robot can be configured for survivability or damage, for killing enemy robots or defending your base - the choice is yours!

Take part in weekly tournaments of Virtual Earth, where every player in battles with equal foes can become a champion, earn real money prizes and bring glory for the Republic. Claim victories through extraordinary tactics, change your class during the battle and demoralize your enemy! Dominate the battlefield not only with your reaction and reflexes but also through well-thought tactical decisions.

Find your city in one of the republics on Virtual Earth map. Join the army and together with your citizens lead your Republic to the top of rankings! Gather your forces, form a batallion, become on of the best fighters or commanders and earn more rewards!
Join the government of your virtual Republic - become a president or minister. Are you sure you can handle it? Think you have enough experience and knowledge? Prove it!