Shoot, blast and slash through hordes of enemies in Rocking Pilot - a twin-stick shooter extravaganza inspired by arcade classics.
Standard propellers are replaced with deadly ROTOR BLADES that chop up tanks and soldiers to pieces. Activating the Overdrive makes your helicopter an immortal machine of destruction: fly & chop through swarms of enemies while deflecting their bullets back at them, or use your own arsenal of guns, rocket launchers and lasers. Mayhem guaranteed.

In the future, war is the main entertainment for the masses and WYNC Studio 1 is broadcasting the greatest TV show on Earth: global conflict!
There is only one reality star that can stop the madness: “The Pilot”, a fearless hero of the skies. After watching hundreds of action movies, it’s time to put your skills to the test.

*A modern take on arcade classics - crafted with care and love by fans of the twin-stick shooter genre. Smooth, slick and full of satisfying explosions.

*A powerful arsenal, upgrades and ways to combine them! Use everything from lasers and mini-guns to nukes and rotor blades.

*Fight with two weapons simultaneously - shoot projectiles while slicing nearby foes with your rotor blades at the same time.

* Brutal but tactical bullet hell - activate your rotor overdrive to deflect bullets and survive environmental harm or use it to cut through tough opponents - quick thinking is required.

* A huge number of collectibles - 76 trophies, 96 crowns and 34 skulls in the main campaign and optional missions.

* Online score challenges and leaderboards. Compete with others to become the ultimate pilot - with ultimate bragging rights. 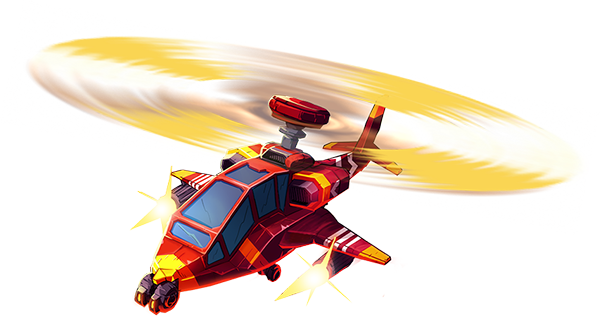