“If you sleep on it, you’re sleeping on one of the best – if not the best – single-player FPS games of this generation.”
VG24/7 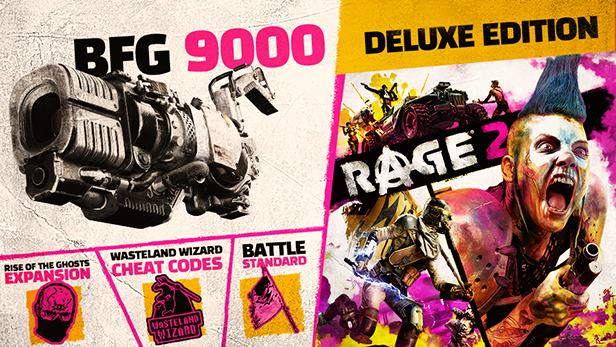 The RAGE 2: Deluxe Edition gives you:

In the second expansion you’ll explore the twisted and cursed alternate reality of the wasteland, the Deadlands. Reverse the curse before the skeletal forces of darkness can break free and take over the land of the living. Sounds easy enough, right?. Arm yourself with a brand-new weapon – a powerful sword that’s also the key to unlocking the gates between realities – and face off against a legion of skeletal enemies. 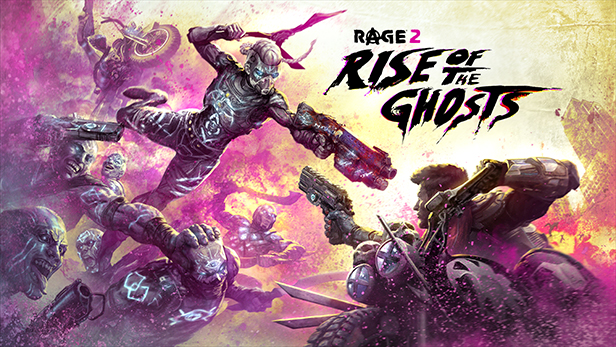 The Ghosts may have just been a wasteland folktale, but not anymore. They’re real and so are their plans for domination. Armed with nanotrite abilities and led by the fearsome Iris, the Ghosts are dangerous enemies. Navigate the Overgrown City, a huge new area, and put a stop to their uprising.

Dive headfirst into a dystopian world devoid of society, law, and order. RAGE 2 brings together two studio powerhouses–Avalanche Studios, masters of open world insanity, and id Software, creators of the first-person shooter –to deliver a carnival of carnage where you can go anywhere, shoot anything, and explode everything.

An asteroid has annihilated 80% of the earth’s population, and humanity’s numbers are dwindling. Ruthless and bloodthirsty gangs roam the open roads and the tyrannical Authority seek to rule with an iron fist. As Walker, the last Ranger of the wasteland and a threat to their power, you have been robbed of your home and left for dead. Now you’ll have to rage for justice and freedom. With ludicrous vehicle combat, super-powered first-person mayhem, and an open world full of emergent madness, you will tear across an unforgiving wasteland battling sadistic gangs to find the tools and tech needed to crush the oppressive rule of The Authority once and for all.

RAGE 2 is a first-person shooter in an open-world, post-apocalyptic setting.

Players assume the role of Walker, one of the last survivors of an attack on the secluded enclave known as Vineland. Players have control over some of Walker's characteristics such as their gender, skills and attire.

Walker wields various firearms and tools to fight against enemies, including traditional guns like a shotgun and pistol, the boomerang-like Wingstick and sci-fi weapons like the Grav-Dart Launcher. Over the course of the game, players will acquire new skills and abilities, like Overdrive, which significantly increases the power and effectiveness of their attacks, Shatter, which pushes back enemies, and Slam, which propels Walker in the air before slamming down onto enemies, dealing damage and throwing them back.

RAGE 2 also features vehicular combat and racing, with the player being able to drive any vehicle in the game world.