Pursuit of Power® 2 : The Chaos Dimension is a real-time strategy game with a different focus than traditional RTS games. Players connect fortresses together in order to build, research technology, generate bonus resources, defend allies, and lay siege to enemies. Each player has a leader unit that summons structures and casts powerful abilities. Rifts dynamically spawn invaders and epic creatures that reward players with prestige when defeated. There is a priority system for enemy targets and a rage mechanic that affects combat in multiple ways.

What is in the Demo?

The demo for Pursuit of Power® 2 places you in a skirmish game as a Shadow Knight versus another SK computer player at normal difficulty. The features are limited in order to simplify things, which is important since the campaign tutorial has not been implemented yet. You will definitely want to read the "help tips" image and it would be good to read the extended help window too.

I launched the Steam store and Demo early, so I can begin building a community around the game. I will update the store page during development, especially when I add new content and features to the game. 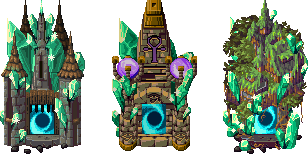 Prestige is awarded for heroic actions against enemies. It can be gained when players connect their zealots to enemy fortresses, destroy enemy zealots, kill enemy leaders, or capture rifts. Prestige is required for some of the most powerful game actions, including the leveling system. 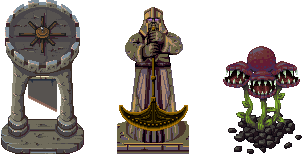 How does the leveling system work? Leaders will gain levels as they accumulate prestige. There will be ways to choose upgrades, possibly tied to the captured rifts. I hope to change the appearance of leaders and visual effects for their abilities as they gain levels.

Fortresses will also have an upgrade path. Many of those choices will be focused around powerful abilities for zealots. Portals will become larger and look more powerful as they are upgraded. Currently, the upgrade path requires a certain amount of "zealot pulses" for build progress, as well as a power and prestige cost.

Those concepts are still in the design phase, but I do want to emphasize that there will be player choices that have a big impact on the game. They will add a lot of strategic depth. Some of the current choices are just placeholders until the designs are completed. 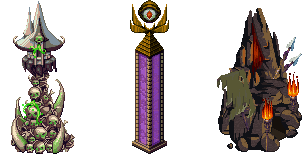 Fighter units will taunt all troops when in range. That can allow your high-damage units to harm enemies without risking death. Immobilization troops can fear, stun, and mesmerize most other troops. That can render a group of enemies helpless as they get picked off. When the immobilized unit is first hit, a bonus buff is triggered for the attacker.

Scout units can stealth and do extra damage when attacking while hidden. They can detect other stealth units and also have a debuff. That debuff amplifies the damage of certain abilities. All 3 major debuffs are displayed as icons near the troop health and rage bars due to their importance. 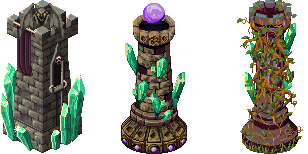 What are the rifts and chaos levels? Rifts don't become active until 5 minutes into the game. That gives players time to capture magic sources, build some defensive structures, and summon troops. Rifts with floating purple particles will become active during the next phase, so take note of where they are located.

When the rifts become active, invaders will start to spawn at a relatively slow rate. Capturing rifts will accumulate prestige over time and help push invaders further away from your fortresses. As mentioned above, they might also be tied to leader upgrades in the future.

For the most part, invaders will harass your fortresses, cause attrition to your troops, and disrupt your zealot paths by causing breaks in the line. It takes a while for them to destroy a fortress on their own. However, they could assist enemy players by destroying most of the defenses, allowing their zealots to capture the fortress.

How does the game end? There are two main ways to win the game. The more traditional way is to capture all of the enemy fortresses. Leveling-up your leader more quickly than your opponents can help, especially once you gain your powerful ability upgrades.

You can also win the game if you are the last player to survive the Apocalypse. The game world becomes increasingly chaotic as players conquer fortresses and destroy the rifts. Powerful creatures from an alternate dimension take notice and start to descend through the rifts, making the encounters more difficult. The attacks increase in strength until only one player survives and the game is won. 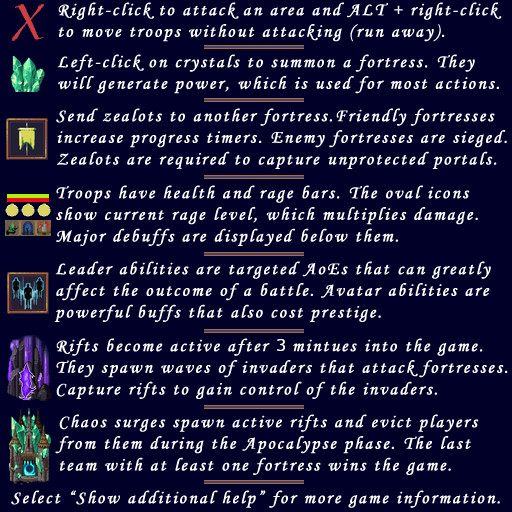 
The rulers continued to harnessed the power of the ancient crystals, believing they could gain immortality. They absorbed so much power that they ascended to another dimension, becoming worshiped by the mortals left behind. The deities then began to fight for dominance while gathering the strongest allies across every known dimension.

Pursuit of Power® 2 is currently in the Beta 1 phase of development. Most of the major game components have already been completed. That includes the path-finding, troop AI, computer player AI, networking, multiplayer, game editor, combat mechanics, fortresses, chaos levels, rifts, invaders, and other major components.