Check out the entire HypeTrain Digital franchise on Steam

“It’s a cop game that looks and plays like Hotline Miami but has more in common with the slower, more tactical first-person SWAT series in practice.”
PC Gamer

“This sliver of game has occupied me all afternoon, despite being only two levels, and I really enjoy how it feels. I especially love how one wrong move blows an entire mission.”
Rock Paper Shotgun

“If you’re a lover of Police Quest or Door Kickers then Police Stories absolutely needs to be on your radar.”
Hardcore Gamer 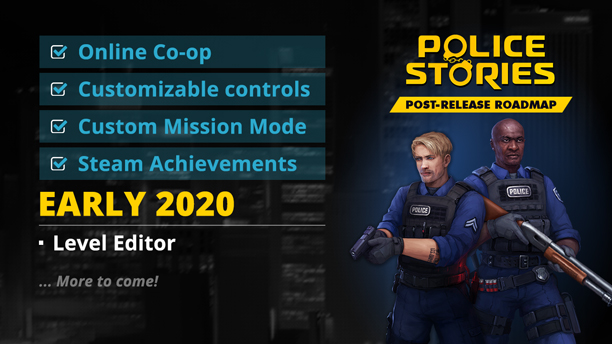 Police Stories is fully playable and enjoyable since day one, but we continue improving the game!

In the near future we plan to add Level Editor (offers the creative freedom for those who can’t wait to create their own maps) and even more content, including new equipment, suspects and levels.

Become a part of Police Stories family by supporting us now! 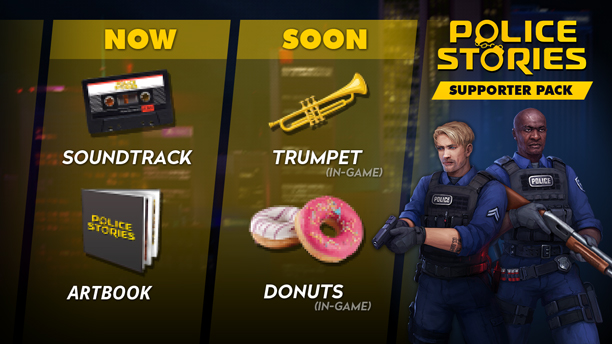 Supporter Pack is a collection of bonus content for those who wish to go the extra mile to support the developers of Police Stories. More items will be added to the Supporter Pack after release!

What do I get as a supporter today?

The entire Police Stories soundtrack, which includes all 25 tracks from the game! Listen anytime, anywhere to imagine yourself a true upholder of justice!
The official artbook. Take a look on the development of the visual part of Police Stories.

What will I get in the future?

An entirely new equipment “Trumpet”. Yes, it is a trumpet.
Donuts! How you’re going to use it? We don’t know.

Inspired by SWAT 4 and gritty police TV shows, Police Stories is a fresh take on top-down shooters with an emphasis on tactics that forces you to make split second decisions. Neutralize criminals, rescue civilians and defuse bombs in Single Player mode or Online Co-op. And remember - shooting first is not an option!