“The contributions of the Subsim-community has played a major part in the development of Wolfpack from day one. Creating a genuine and realistic U-boat experience is not only a technical and visual challenge. It also requires a massive research effort, since the entire concept of the game is heavily dependant on actual historical facts and technology. This research acts as the foundation on which the design choices are made, and the collective knowledge possessed by the community is an invaluable asset.

In order to make Wolfpack reach its full potential, we believe that the involvement of the community is essential during the entire process. Not only by providing technical and historical facts, but also by actually playing the game, contributing with ideas regarding campaign scenarios and missions, enemy behaviour and additional features such as difficulty options. It is a lot more efficient for us as developers to take part of your actual experiences as players, rather than keeping you guessing how the game actually feels to play.

The Early Access release gives you as a player the possibility to be part of the process and affect the final product, and gives us as developers the privilege to hear your thoughts and ideas while finishing the final product.”

“The final version of the game will be released in 2022.”

“The full version of Wolfpack will feature a campaign with missions based on iconic events during the different stages of german U-boat warfare between 1939 and 1945 such as the infiltration of Scapa Flow. The level of difficulty will increase successively throughout the war, with additional and improved enemy ships, aircraft and anti-U-boat tactics. The missions will be set in various seasons and locations with suitable weather conditions.

The full version of the game will also introduce tech level updates for the player, such as radar and improved weaponry.”

“The current version of Wolfpack features a player-controlled type VII C U-boat and offers a unique, hands on take on U-boat simulation. The complex systems are operated manually in first person in order to create a genuine and immersive experience.

The players encounter large randomized convoys of merchants escorted by destroyers, sloops, and corvettes. Their objective is to intercept and sink enemy ships by launching torpedoes or by using the 88mm deck gun and escape undetected. Cooperative gameplay with several crews controlling different U-boats is already available.

All stations and instruments in the U-boat are modeled after original pictures and sources, and kept as realistic as possible without compromising usability. The players may control depth and speed using the dive planes. Use the hydrophone to examine and filter exterior sound in order to locate enemy ships. Send encrypted radio messages using the radio and enigma machine. Determine the distance, speed and angle of ships while configuring the TDC manually and pursue manual navigation using intricate map tools.”

“Wolfpack will be priced the same during and after the Early Access period.”

“Since Wolfpack has been a community based project from the start, we intend to keep it that way and increase the community involvement even more during the Early Access period. We already have a small but dedicated group of people contributing with research and ideas, but we believe that the interest will grow even more when the game gets available on Early Access, and a bigger crowd gets to experience the game for themselves.

Our close ties with Subsim.com, where we have our own sub-forum have made us accustomed to discussing ideas and concepts with the community, and we have had great experiences with forum threads and Q&A sessions discussing all sorts of aspects of the game. We are of course planning on incorporating the Steam Community Hub in the process, communicating with the players through discussions, answering questions and posting news and updates regularly.

Wolfpack is not only a community based project, but also also a Co-Op game where the core feature is playing with other people. This pushes the need for an active community even further, and we strive to encourage people to form new U-boat crews, be part of the discussion and sharing their thoughts and opinions both with us and with fellow players.”

“"Immersion” means different things to different players. Turn-based and RTS players identify so much with their units that they feel they are members of the force. Simulation and FPS players have even more visceral connections: they are virtually on the spot, spewing bullets and doing Split-Ss. Submarine simulations tend to combine both styles. The main position is the captain’s positions in the command center where he can pick targets by the periscope. He can also click on dials to control speed, course and depth. Some simulations can send players to specific compartments like engineering, fire control, sonar/radar, radio, even crew quarters via clicks on icons. Still, the player is in control with no real change in perspective. Skvader Studios’ – aided by Subsim.com -- Wolfpack gives a whole new dimension to submarine sims.”
Wargamer

“If you've ever dreamed of working on a "highly detailed German type VII U-boat during the Second World War", Wolfpack is the game for you.”
PC Gamer

“"It was our second mission, so our three-man crew was a little nervous. Even though my two gaming buddies and I cracked jokes about our rather limited adventures at sea we knew that we were playing a game that was deadly serious. We were tasked with seeking out and destroying any British supply convoys that we came across in the frigid waters of the North Sea. Wolfpack is not an easy game. It sure managed to flummox my two gaming buddies and I when we initially tried it out. This is not a submarine simulator where many of the complex calculations and controls are streamlined for you. No, this is a full-on simulator which forces you to come to grips with your chosen U-boats many machinations all by yourselves. And when everything comes together and your crew finally comes to grips with Wolfpack’s carefully articulated mechanics, the game becomes a thing of beauty that I personally haven’t experienced in most of the games I’ve played."”
91% – CyberpowerPC

Wolfpack is a realistic, first person, co-op U-boat game where one or multiple crews of players man the stations of a highly detailed German type VII U-boat during the Second World War. The crew will encounter large randomized convoys of merchants escorted by destroyers, sloops, and corvettes. Their objective is to intercept and sink enemy ships and escape undetected.


Each player mans a station in the U-boat, and the crew will need to cooperate in order to succeed in their mission. Unlike other submarine simulators, Wolfpack is designed for players to procedurally manage the submarine through direct, manual interaction with valves, levers, and instruments.

Each U-boat has up to five players: The captain, the helmsman, the dive officer, the radio man, and the navigator.

The radio man operates the hydrophone, radio, radio direction finder, and Enigma machine. The helmsman controls the U-boats heading and speed, and operates the torpedo data computer. The dive officer controls the depth using the dive planes, ballast and negative tanks and serves as a lookout and gunner for the deck gun and anti aircraft gun. The navigator calculates the position of the u-boat, and determines the best route to intercept enemy convoys. The captain is the commander of the U-boat, and leads the crew.

Wolfpack also features a single player mode where one captain can easily manage his U-boat solo. Plus, it is easy to start a mission solo and allow other players to join the battle in their own subs as part of a wolfpack. The captains can use the U-boat radio to communicate with each other just like the real U-boats did.

All stations and instruments in the U-boat are carefully modeled after original pictures and sources, and kept as realistic as possible without compromising usability. The game contains a fully operational torpedo data computer, manual navigation tools, and ship recognition manual. 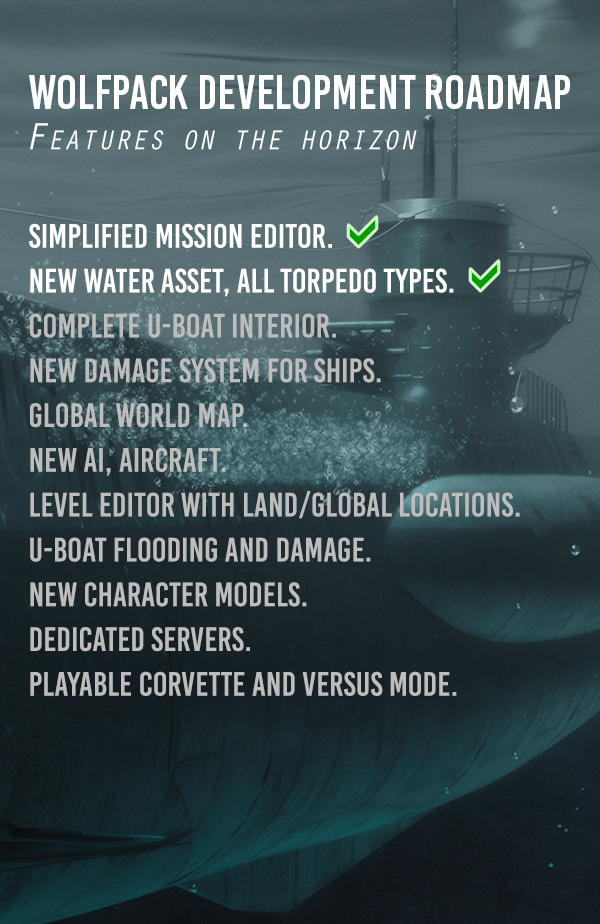