"I get the sense that this could be the breakthrough game for VR storytelling. The Assembly's atmosphere and atypical setting evoke memories of BioShock, Half-Life, and Dishonored.”
Gamesradar+

“It's the first VR game I've played that feels like something I can sit down with for an hour or more at a time, thanks in equal parts to an intriguing story, lovely world detail, and gamepad controls that ingeniously solve many of the long-standing problems with medium.”
PCGamesN

“At one point in the game, the decision I was forced to make actually brought tears to my eyes, which was very surprising; that's how immersed I was in the story.”
Tom's Hardware

"The Assembly is a promising sight: a virtual reality game that unfolds in a smart way and treats its players maturely.”
Bit-Gamer

“One of the most fascinating game experiences I’ve had all year.”
Kotaku

“The Assembly has one of the most thought out and established worlds of any upcoming VR experience.”
IGN

“nDreams have created a beautifully realistic world.” “It blew my mind – there is no other way to say it.”
God is a Geek

“The Assembly brings VR to a whole other level.”
Hardcore Gamer

“The Assembly truly looks and feels like the next generation of adventure games.”
Gaming Nexus

"The Assembly is an engaging and well produced game, made with genuine enthusiasm for sharing what VR has to offer.”
Digital Trends

"The Assembly's moody cold palette and ambient sounds work to create an atmosphere that feels frightfully tense, especially when you're trespassing in your co-workers offices and prying for information.”
Game Reactor

“Although the game is done from a first person perspective, we’re happy to report that we didn’t experience any kind of sickness during our game time – clocking in close to an hour in fact!”
VR Source

“I found myself genuinely invested in the outcome, and challenged by both the puzzles and the moral quandaries set before me.”
Road to VR

“The Assembly is a worthy investment for VR aficionados.”
VR Focus 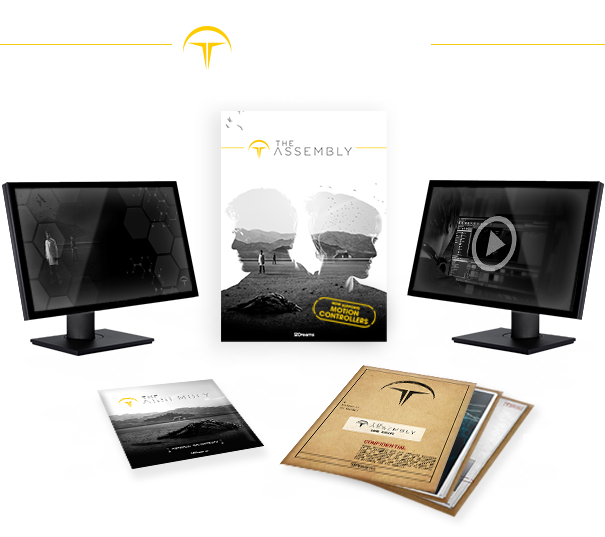 A first-person interactive story for mature audiences, The Assembly is a long-form game designed from the ground up for VR. Play as two individuals and discover a morally challenging organization from contrasting perspectives. Face trials, investigate the Assembly’s secret bunker and make tough decisions. But will your actions and their repercussions save lives… or lead to catastrophe?

Interested in more VR games and experiences? Check out the rest of the nDreams VR catalogue here!

© nDreams. nDreams, the nDreams logo and The Assembly are either registered trademarks or trademarks of nDreams Ltd. All rights reserved.