“A new challenger approaches in the realm of tournament fighting games.”
8/10 – Co-op Couple

“GCM2 delivers on its promise of a frantic local arena game.”
Indie Roundup

“Whether you’re playing alone or with friends, the replay value is enormous.”
GamersFTW

Grand Class Melee 2 is an RPG job system arena fighter featuring a huge roster of over 60 character classes to battle with. Drawing inspiration from JRPG favorites and the competitive classics of console multiplayer, players progress through 8 intensifying rounds of fierce combat, gain new abilities each round and build up their arsenals to the top of the class tree.

To bolster the slash/thrust/parry weapons-based melee, every player pairs the new ability of their chosen job with one earned from an earlier job for an ever-evolving, two-fisted loadout. With up to 4 players mixing & matching, the possibilities are sprawling!

The fight gets fleshed out further by bots, teams, custom scoring, deeply tweakable procedurally generated battlefields and beyond with additional gameplay options.

GCM2 offers a highly-customizable multiplayer brawl supporting up to 4 players on gamepads & keyboard. Play online with friends via Remote Play. 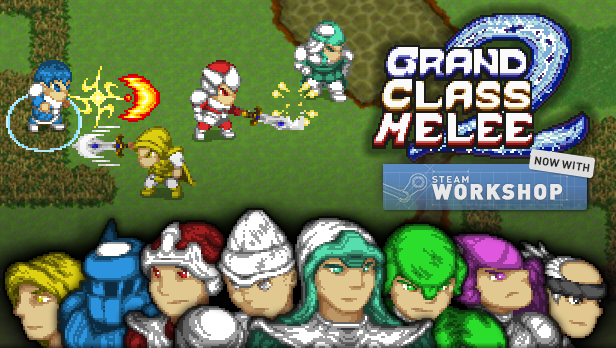 In the tradition of Street Fighter II, Warcraft II, Bomberman 2, Seiken Densetsu 2 and other greats you may not have played until they hit with part two, we present Grand Class Melee 2 - a game for those who like a little variety in their job system arena combat.

Check out the Demo if you want to try it first!

* HEY CONTENT CREATORS! All video, streaming & journalistic coverage of Grand Class Melee 2 is totally cool by us. If you're doing something neat, we'd love to hear about it! :) *