“If you've got questions, ask them on Discord! https://discord.gg/geneshiftauto

Ever since the demo was released way back in 2009, Gene Shift Auto has been developed with the help of its player base. With over 10 years of balancing, testing and player suggestions, Gene Shift Auto is ready to go. But we don't want to finish just yet - there's so much cool stuff we can add!”

“Probably a year or two, but it's hard to know for sure - I'm not very good at estimating time. Gene Shift Auto is ready, but why stop development so soon? As long as you keep giving me cool ideas I'll keep on adding them.

“The core mechanics of Gene Shift Auto are done and have been playtested for years now. I'd like to keep that fairly similar. But there's a lot of new content to add. I can't make any specific promises but here are a few ideas often raised by the existing community:


To be clear these are just examples. None of these are promises! A tank has been suggested for years and I'd love to try it out. But if it turns out to be totally unbalanced I won't add it. Again, please only buy this game if you like how it exists today.”

“Gene Shift Auto is fully playable, well balanced and low in bugs. It's already undergone 10 years of community feedback. Thousands of players and posts in the forums have directly shaped this game, with hundreds of versions improving it since 2009, and hundreds more during its time so far in Early Access.

All of the features listed in the game description below are already in the game.”

“Not sure, but the price of the DLC might rise after the full launch. I believe early adopters should get a better deal as thanks for the support and feedback you provide.”

“The same way I've worked for the past 10 years. I listen to what the community says in Discord, and try polish the things they like, and fix the things they don't like. Sometimes that means me coming up with a brand new idea, and other times (often) someone else in the community already suggests it. Then create a test build, play around and make sure it's actually better, and release. Iterate over and over to make the game as smooth as possible.

I chat and theorycraft on Discord a lot. Come join! I read every single post and spend plenty of time discussing balance and new ideas with the community. I'm a one-man team so I'm fairly flexible. No corporate overhead, just a bunch of gamers chatting on Discord making the funnest game we can.

Chat with the community on Discord: https://discord.gg/geneshiftauto
Or on the Steam Forums: http://steamcommunity.com/app/308600/discussions”

Gene Shift Auto is a battle royale set inside a chaotic GTA-style city. It has cops, missions, high-speed car chases and more. This city is a playground full of risk and reward, and by mastering it you'll level up powerful abilities like Invisibility, Spike Traps, and Car Bombs.

Like a roguelike, skill choices are randomly generated, so each game plays different and you'll need to adapt to survive. And with ultra-fast 5 minute rounds, you'll have to think on your feet to create a skill build strong enough to win the final showdown! 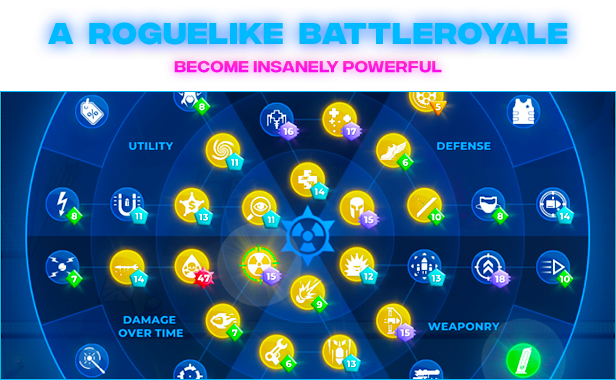 These abilities are easy to learn but hard to master, and provide a high skill ceiling perfect for game-winning clutch plays. When you level up you must choose from 3 randomly selected skills. Just like a roguelike, this makes each game play differently, and you are rewarded for your ability to adapt and create synergistic skill builds on the fly. 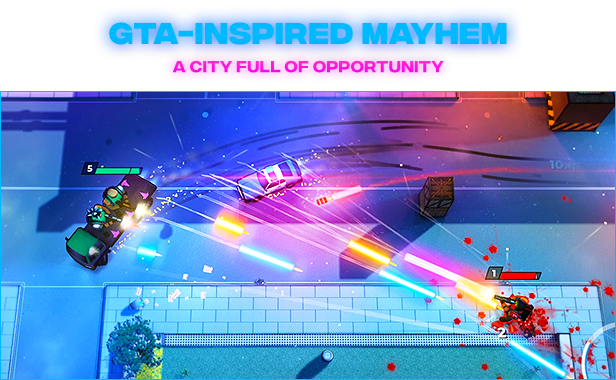 Want to level up fast? This chaotic city has multiple paths to victory! You can do missions, fight for supply drops, explore for rare loot, and if you're feeling risky - aggro the cops.

But remember, the circle is shrinking. You have to balance risk with reward to earn as much farm as possible, while still surviving to the final showdown. Do you spend your precious time shopping for the perfect weapon? Pre-placing hidden bombs in the showdown area? Or obliterating waves of cop cars as you climb the wanted levels? The choice is yours. 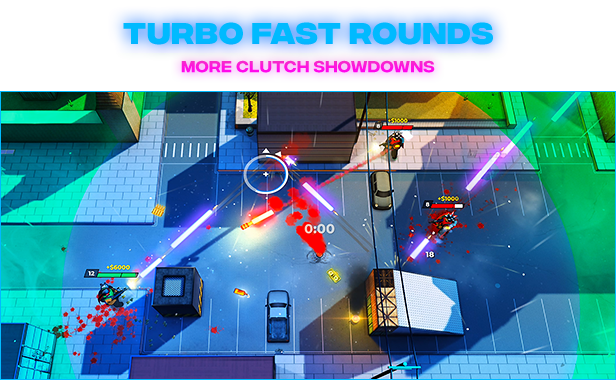 The circle is shrinking - fast! While other BRs have one long round, Gene Shift Auto has 3 ultra-fast rounds - with a high-stakes showdown every 5 minutes. Win round 3 to win the game!

Your skill build progresses from round to round, and if you die you get to keep playing too. You'll play as a zombie and can loot for the next round - or hunt down a survivor to revive. No queueing time, no getting booted to the main menu, just pure refined non-stop action.