“As a multiplayer game, having many people play the game will shape the way of development going forward. Our first game mode is an asynchronous multiplayer mode, which needs a lot of balancing to ensure a fun experience for both teams. We are hoping to get insights into player behavior during the Early Access phase in order to perfect our balancing.”

“The basic gameplay for Everything Has Arms is already pretty far along where we want it to be. During the Early Access phase, we plan to observe how the community is playing the game and adjust the balance and gameplay mechanics to be able to offer a fun experience for both teams, the mimics and the hunters.

Since this game offers a competitive team mode, we also plan to add more variety in terms of different maps to play on. We start into Early Access with one map and plan to design and add more while incorporating the community feedback we observe.

Additionally, for Everything Has Arms is a Free to Play game, we plan to add more outfits, hats and avatars which players can choose from to customize their style in the game. Rest assured, none of the paid assets will affect the gameplay in any way in order to ensure a fair competitive game experience.”

“The game is fully playable and features one game mode and one map as of the Early Access release date. Online Multiplayer is fully implemented, including matchmaking, voice and cross-play.”

“The plan is to keep the game free to play at all stages of development and add ingame purchases for customization. The added customization will always only affect a players look while in-game.

We also plan to experiment with a battle pass system to support an active competitive scene.”

“We are using the player feedback from the Steam Forums as well as Discord to advance the development. Since this is an online game, the community will be extremly valuable to guide the direction and iteration of the gameplay.”

Play Everything Has Arms 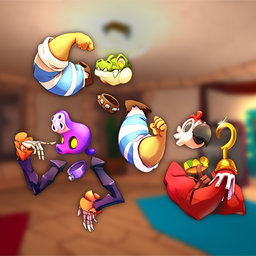 It's hide-and-seek on steroids in VR. And everything has arms!

Hunters are looking for the heavily "armed" items in this multiplayer VR prop-hunt game. As mimic you blend in and fool the hunters, high-fiving other mimics for victory. Hunters need to find and catch the flexing flower pots in this fast-paced hide and seek game. Everything has arms in Everything Has Arms.
In Everything has Arms you either take on the role of a Hunter or become a Mimic. Mimics can disguise themselves by possessing objects and hide as them. Score by high-fiving other mimics and staying in the game as long as possible. You can only stay in object-form for a limited time, after that your arms pop out. As soon as the hunters spot you, you need to bolt and lose them before they catch you. Hunters need to find and chase down the Mimics. Their finger guns will slow them down and hinder their jumping ability. (Mimics can fire flares with their own finger guns, signaling other Mimics positions on the map.)

All objects that are armless can be possessed by grabbing them with your hand. Press the trigger to use the object as your body. You hide by putting your hands in front of your face, but remember: You can only hide for a limited amount of time! Be smart and use it to get away from the hunters.

Well, everything has arms and that’s how you move in the world! You scoot around by propelling yourself with your arms and hands. push yourself away from the ground, similar to a monkey. Grab onto walls with the trigger to hold on, push away from the ground to jump. You can increase your jump by using two hands to push. The movement relies on physics, so you can also wall jump if you time everything right.

As hunters, your goal is to identify the Mimics in the level, chase them and catch them. Your finger gun fires sticky goo to slow Mimics down and signal them on the map. Mimics can hide from you in object form for a limited time.

Mimics have to play a dangerous hide and seek game. To hide, simply move your hands in front of your face and you become the object you currently possess. Score by high fiving the wall-mounted hands or other mimics. Your flare-finger-gun gives you the ability to point to places in the level for other mimics to see, but the hunters can also see it.
The hunters will try to catch you, escape them by running away or by cleverly disguising yourself.