“Creature Cauldron is a small team of professional game developers. We want Spirit Hunters: Infinite Horde to be the very best it can be and hope that by releasing into early access we can continue make the game even greater with the help of the amazing community of gamers here on Steam.”

“It is our aim to complete Spirit Hunters: Infinite Horde in a very timely manner. We anticipate releasing a full version of the game by August 2022. We do intend to update often with tons of new content for you to enjoy along the way.”

“We are planning to add the following and more…
”

“The game is fully playable with a ton of content to enjoy with a large amount of upgrades and unlocks to earn via the extensive meta progression system. You can battle thousands of monsters in 4 different maps at Early Access launch with many more to come. The game is designed to be extremely expandable and a huge amount of effort has gone into making the foundations of Spirit Hunters: Infinite Horde enjoyable so that we can build upon that.

Current State
4 maps to unlock with 2 challenge skulls for each - total 8 maps to beat
Each map is fully playable and waiting for you to explore with their own monsters, sub bosses and boss battles.
4 Hero's to play as (2 unlockable)
10 abilities to unlock, upgrade and fight with
15 pets to unlock
Over 400 unlocks and upgrades to purchase in the Divinity Web.

Please see the "About this game" section for a more detailed description of the game.”

“Spirit Hunters: Infinite Horde will be very reasonably priced now and forever. It may increase in price once the game is complete but it will not be by much and will still remain very affordable.”

“Working with the community both here on Steam and in the Creature Cauldron discord is one of the primary reasons for releasing the game into early access on Steam. We want to make a game that not only we love, but one you all will love and feel a part of. We encourage all feedback and suggestions and are excited to see what awesome stuff you all bring to the battle field!” 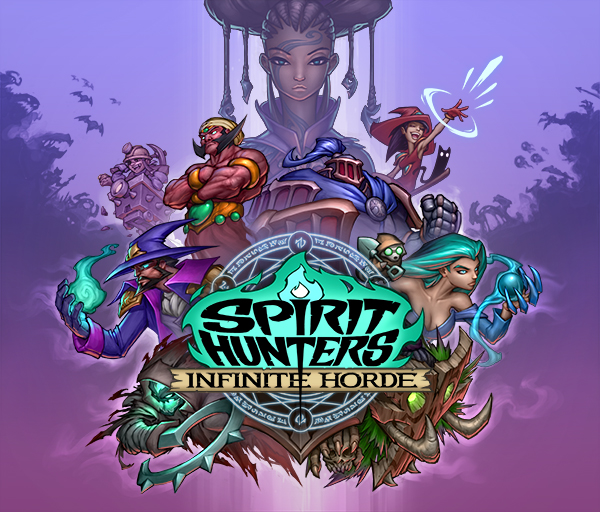 Spirit Hunters: Infinite Horde is a rogue-lite, action game in which you fight huge waves of monsters using passive attacks and abilities. Slay thousands and thousands of endlessly encroaching monsters to stay alive! Collect souls to level up and to increase your power and abilities both in the field and in the Oracle’s vast, permanent upgrade system.

Become a god in minutes by learning the abilities you can obtain when you level up and how they grow in power. Combine many different powerful attacks to take down the hordes!

Death is just a state, The oracle will bring you back to fight another day.