Super Kit: TO THE TOP

“TO THE TOP featured a unique set of mechanics for VR Platforming. Early Access for Super Kit: TO THE TOP allows you to enjoy that classic gameplay with a whole new look, while participating with us in refining and extending this new Chapter in the series.
Join the Discord to keep up to date on the current progress!

Working directly with you and iterating on your feedback is what will make Super Kit: TO THE TOP be the best VR Platformer it can be.”

“The current plan puts us in Early Access for roughly 4 months, however it could take longer to implement feedback and other unforseen implementation delays.”

“Our intent is to create a VR Platformer with what players would expect from a "Full" game. To get us there, we plan to Add:

“The planned Core Features of the game are Finished and about 50% of the planned levels and maps are completed. There are currently:
”

“TO THE TOP represented a new spin on Platforming games in VR, and we wouldn't have gotten there without the involvement of the Community.

Expanding on that base, we want to involve you in the process earlier in development to help us make this the best VR Platformer it can be. Join us on Discord, the Steam Community pages, and on Twitter to receive the latest updates and take part in shaping this evolution of VR Platforming games.”

*Leap*
Super Kit: TO THE TOP brings back the classic dynamic movement from the original TO THE TOP.
Simple to use, takes advantages of VR input, and feels very comfortable to play.

*Fight*
New to the series: Combat Abilities and Powers.
Take on Fun, dynamic foes that add life to levels and new obstacles to tackle.

*Explore*
Explore each floor of the Tower to find Artifacts, gain power and escape. 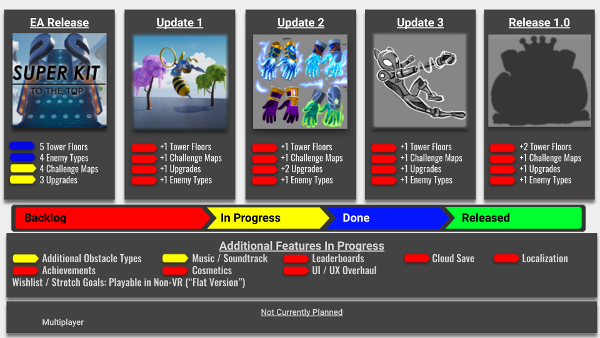