“We want to make sure that we’ll be able to present our product on release in its best condition. The best way to do it is through gathering feedback from the players during development.
Thanks to the support of our player base the quality of our game will constantly grow, and we’ll be able to maximize it prior to full release.”

“According to our estimates, MILFs of Sunville will stay in EA for at least one year, but the development cycle is subject to change. It may take longer than expected, depending on the amount of player feedback that we would require to create the game’s endings.”

“The full version will feature the main part of character stories and quests. It’s possible that the entire story will end up being too long for a single project which will prompt the creation of a sequel.”

“The Early Access version of the game will include the beginning of the story and an introduction of all the main characters.”

“If prior to full release we feel that the game’s content has largely increased in volume, the game’s price may be slightly increased to accommodate the scale of the final product. This point may change during the EA phase.”

“We expect that the open dialogue with our community will play an important role in ensuring the quality of our game.
Before releasing the game on Steam we’ve already established an active community on Discord. We regularly discuss the game’s mechanics, player feedback and suggestions, and many other things.”

This game contains adult themes and content that may not be suitable for all ages.
All acts in the game are consensual.

A young guy is forced to leave his luxurious life in a big city behind and return to a small town of Sunville, located near the ocean shore.
He dreams of going back and is mad at his father who ditched him for a young wife and left him without any financial support.
He must find a way and acquire the means to make his plan come true, but will he be able to do it? 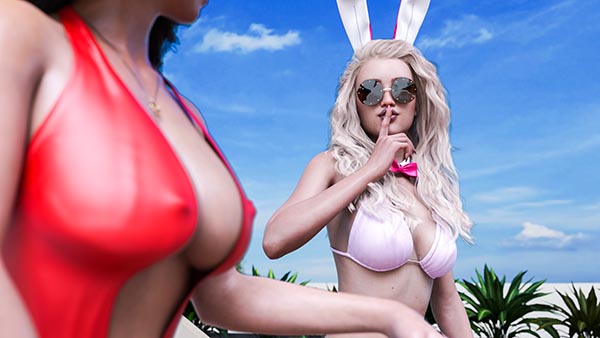 A lot of temptations await him on his way.

The college he’s going to attend is full of sexy girls and teachers.
He needs to make a choice: follow his original goal or dive into a seductive world of love affairs. But nothing is ever easy — some relationships will demand changes from him.
He comes into town as a simple guy, will he be able to change? And what direction will those changes take? Will he become better or worse? There are a lot of different ways of achieving his goals.

You’re going to assume the role of that young man in a visual novel with excellent animations and quality graphics.
The game also has a slew of cool features. For example, you can take hidden photos with your phone’s camera.

Explore the world of MILFs of Sunville!

Dive deep into realistic relationships with people around you!

Regular free updates will be provided to anyone who has already purchased the game.