U-ena is free visual novel game made in Japan. You can read the story that unfolds around the mysterious phenomenon of distant fireworks.

That flash orange and white in the sky, and bloom blue flower at the end.

This celestial event has recently begun to appear and people call that "Far fireworks." 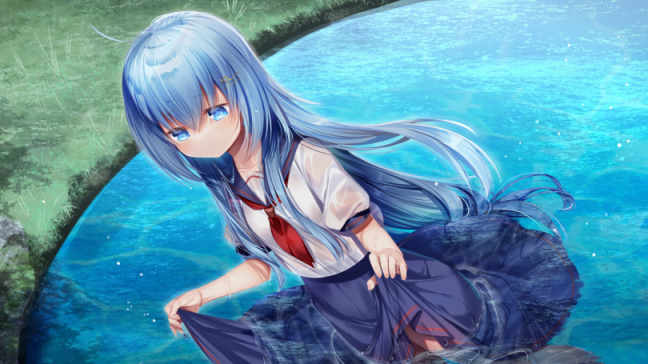 The story is set in nondescript rural junior high scool.

Tomoki belong to a club that mix literatureclub and tea ceremony club.

It was the night he saw Far fireworks. He meets soaked girl in the center of lake.

He spend usual days with Yuena and club president of Kotonoha Circle,

An unreal secret that approaches when you meet someone you thought you couldn't meet.

Even if taking her hand will eventually change the world, I am ー.

A summer seem to prolong the moment cross between two people for all eternity.

I'm still praying in the sky that time should continue forever.

"Not Yuena-san, Yuena."
A girl met a boy when have been getting soaked in the fountain.
Afterward she was transferred to Tomoki's school.
She likes to eat and always looking forward
to tha sweets Utano Shinonome brings.
She is frank to everyone and can't feel out the situation.
According to her, she has some work to do.

"Of course. I'm grateful for you."
She is club president of Kotonoha Circle and Tomoki's senior at school.She comes club room faster than anybody, and likes looking of Tomoki coming club room.
She is beautiful girl that everyone admits, and respected in school,
but is not at all concerned it.
She is always a guiding principle for Tomoki.
She likes universe, is curious about unidentifiable riddle of Far fireworks.