In order to deliver the best possible campaigns it is important to get feedback early and see different strategies and combinations people will select.”

“We plan to have small balance updates through out Early Access but planned features will be released in two large updates. Once the following updates have been completed, the game will leave early access.


Some of the planned features are as follows:
1st update:
Computer AI player
Custom Map Maker

“The Early Access releases with a complete standard match. This is a Player vs Player 2-4 match.

The Full Version has a planned single player campaign/story for each faction. This campaigns will be able to deliver single player content and progression to Old Salt.”

“Please join the Discord to help improve Old Salt! https://discord.gg/zCw9haRRma
We are already doing events and actively communicating with players. We are on a pre-steam ruleset and have already made great improvements from the help of players testing the game!

We also pull a battle log of ever move made on multiplayer games, This data will be used to see what works well and what changes need to be made. We are planning to create a report for the community and generate polls from things we see in the report.”

Players begin the game as one of six factions with control of three islands, a fleet of ships and a handful of gold.
A player obtains victory over the other players by controlling 6 islands or being the last ship sailing. There are many routes to that victory but the journey will without a doubt involve sailing your ships, firing cannons, seizing islands, and using faction abilities.

Players can move up to 3 ships on their turn and are able to move a ship up to 3 tiles unless aided by Known Tradewinds
Ships are able to turn in any direction players desire. Think of the movie Pirates of the Caribbean where they dropped anchor and drift a U-turn and outmaneuvered the Black Pearl. 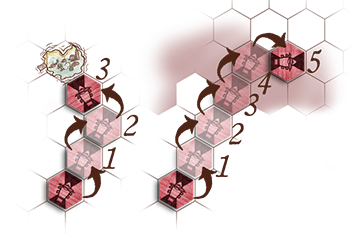 Step one of firing your epic cannons, count the number of tiles to the target. That is the minimum you need to roll to hit the target.
Step two, pay your crew to load and fire that cannon! 1 coin to fire a single shot. Roll to see if it is successful.
If successful, place a damage token under the target, if unsuccessful, roll better next time. 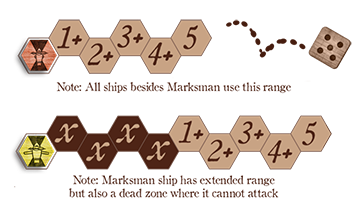 When seizing an island, a player must first be adjacent to the island they would like to control. Once in position, pay 2 coins for the island along with a mast that belongs to the faction you are wrestling island control from.
Seizing an island that is defended is very costly. For each enemy ship that controls that island within 2 tiles adds 1 coin to the overall cost of seizing the island. 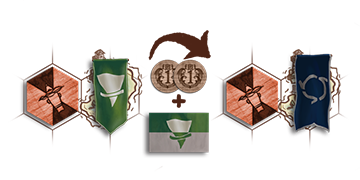 When playing with faction abilities, each player selects 1 of the 6 factions to be. Each faction comes with 3 exciting and unique abilities that no one else has access to. These will help players turn the tide of war.
Abilities can cost coins to use or be limited on when you can use them, such as on your turn or when you seize an island.
On the left side of each faction card is an illustration, some adjectives to describe the faction and a quote the faction can be heard saying from time to time. 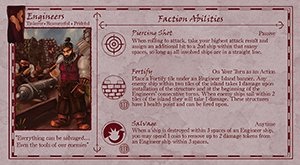