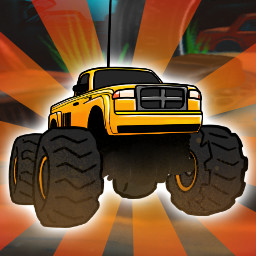 “We are a two person game making team (1 on graphics, 1 on dev) and our focus has been 100% on building a cool racing game: Now we need to see what other people think to try to make it better!

We play the game differently to you, we view it differently and we probably like different things. By opening it up to the community, we want to hear other voices and we hope to give everyone a fantastic RC arcade racing game with balanced and fun A.I.

The game was developed initially as a VR-only title, but we made the decision along the way to add non-VR support too. The non-VR may grow and evolve just as much as the VR version along the way, which means getting feedback on both versions is going to be super helpful for keeping things on track.”

“We anticipate the game being in Early Access for around 3-6 months.”

“Aside from being much more polished than it is right now, we have plans for some new tracks, more vehicles to unlock, and additional game modes.”

“Completed:
Campaign mode
Quick race (where you can pick any unlocked track and car and play for fun)
Free roam

Still under construction:
Grand Prix mode has 6 cups in it, but we've planned for 9.
A driving school level comes first in career, and is intended to introduce players to driving the RC cars. At this stage, it's very basic and lacks proper instructions.
Online multiplayer is fully working - you can free roam or race with up to 6 friends over the internet - but it's fairly basic and we'd like to build this out if it proves to be popular.”

“Price will likely stay the same.”

“We're interested in all feedback from the community - you can send this to us via email or tell us about it on the Steam forums.

Want to see some more crawler levels? Mini games? Got ideas? Tell us about it!”

Read more
Notice: This title runs in both standard and VR modes. It does not require a VR headset.
VR Supported

“RC Rush brings the fun and thrill of racing RC cars along with adding nostalgia for many players out there and I can't wait to see what comes next.”
The VR Dimension

“I know that sometimes getting into Early Access is risky, but given how polished everything is, how much it offers and its low price, RC Rush could not be more recommended for all lovers of radio controlled cars, be it using VR or not.”
Desconsolados

RC Rush is an amazing racing experience you can play in VR or on your PC monitor. To drive, you can use a gamepad, keyboard, VR controllers or USB RC controller. There are several options to allow you to play the game how you want - choose the A.I. driver difficulty level and apply helpers to the steering or braking, if you like. The goal here is RC FUN for EVERYONE!