“Currently we are working on full version of the Crazy Foods where will be more and more new gameplay modes, characters, skins, textures, maps and logics which needs support for human resources. Considering CF is a global online multiplayer game, some possible minor or major bugs may occur in the game, we will fix it and update in a daily basis until the full game will be available. Also we need to know the opinion of the gamers about the game logic which we generated for them. We need feedbacks of community about graphics style of the game, skins of the characters, textures of the maps and characters. As of now we are working on graphics, animations and sound improvements which will be fully operational and ideal on full release. Also we are going to add more modes, such as Battle Royale and Platform.
But anyway you can enjoy your time with mighty and Crazy Foods :)”

“Gameplay modes, characters, skins, textures, maps and logics will be improved and new ones added.”

“Right now the game is operational, but with lack of ideal animations and gameplay logics is not fully established yet. In early access version you can enjoy the and have fun with the game and we will improve the graphics, animations and logics day by day with the idea and feedback support of community.”

“We are not planning to increase current price.”

“Please kindly share all your priceless thoughts and feedbacks with sending us an e-mail to "feedback@crazyfoodsgame.com" for further communication. We need your feedbacks which will make us better and stronger in order to make Crazy Foods more better and joyful! :)”
Read more 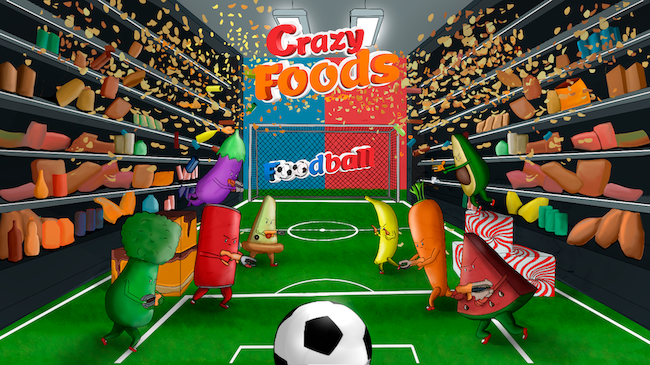 Crazy Foods is a massively multiplayer online battle arena game with upcoming crazy modes where foods are going crazy eliminating each other until one winner or team will get the fork throne!

Cute shooter for playing with friends who want to have fun and enjoy their time together.

In Hypermarket you will have 3 modes:

FOODBALL - football match mode with 2 teams which are trying to score goal by hitting the ball by shooting with rifle, as well as killing each other to eliminate players. The most fun mode where 1x1, 2x2, 3x3 and 4x4 team battles. Enjoy!

Free-for-All - every food for himself! Every online player will be against each other and who gets the most number of kills, will be the winner. Each time when you die, you will be spammed alive and continue the battle.

Team Deathmatch - you will fight against other teams cooperating with your team mates and the team who gets the most number of kills, will be the winner. Each time when you die, you will be spammed back to your base and continue the battle. Total 2 teams with 4 online players each.

Grocery: (Will be available soon)

Base Defend - In grocery you have to defend your base on the shelf cooperating with your team mates building blocks and guns and also try to attack other teams bases to win. Total 4 teams with 4 online players each. Each game session lasts for 10 minutes with unlimited rounds. Each time when you die, you will be spammed back to your base and continue your game without gun. You have to reach middle table in order to get the gun and continue the battle.