No Bloat Studios 🎮// Working on Scoober Splat! 🦑 on Twitter

“We received some questions about releasing game in EA. We can deliver playable game to let players send us feedback regarding current build stage and new ideas for further development. All the feedback we get will help to improve gameplay and balance it. We have some tricky tech to implement, mainly the cross-platform networking and integrated voice chat. Support from the community will contribute to polish final mechanics and together we can achieve the expected experience.”

“The most important goal is to create a seamless cross-play experience.
On top of that we plan:
- Seasonal Unlockable Content
- More Powerups to choose from
- More Maps
- More Game Modes
- More language support”

“The game is fully playable in its current version, however there may be bugs. The game will be patched often with bug fixes, gameplay tweaks, and new content.
Currently Implemented Features:
- Create and join lobbies
- Voice Chat and Proximity Chat
- 3 Game Modes: Warm Up, Power Ups, Infected
- 3 Maps: Left, Right and Full
- Cosmetics
- Experience System
- Power Up System”

“Price will not change when we leave Early Access, however the DLC may go up in price afterwards as a thank-you for those who supported us through Early Access.”

“We have built some community around this project. This will help us to listen our community carefully - based on ideas or suggestions we can plan further development. It will play a key and integral role throughout the game's development process. Hoping to create discussions in the both the Steam community hub and our Discord.”

Scoober Splat is a hilarious Online 2D Party Game of monster chase. Up to 16 players, two people play as monsterous Goobers on the hunt. Together, the rest of the Scoobers must repair the submarine in order to escape certain death. After the dust settles, everyone gains a new power-up and it starts all over again, with even more chaos! With a Free Browser Version, getting your friends to play is easy as dropping a link in your group chat! There's even Built In Voice Chat and Proximity Chat!

Just drop a link in your group chat to invite your friends, right from the browser! Inviting a group of friends doesn't require a single download. 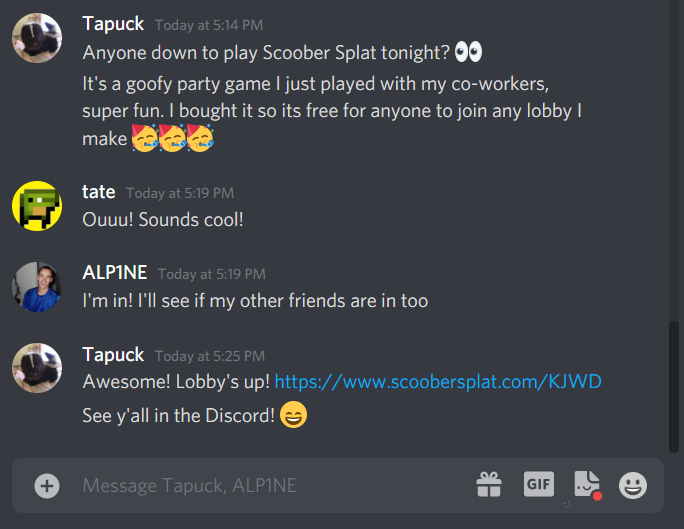 Scavenge to find your repairs.

Hide in the shadows to escape the evil Goober!

Work together to fend off onslaught of Goobers.