Developer: Paris Stalker, ALL iN
Publisher: ALL iN
Release Date: Summer 2021

“ZONERS is a game being predominantly made by just one person (that's me!), and it's important to me that v1.0 is a polished and complete package regardless of that fact. This goes from the design, to the art, to the animations, to the music, to the under the hood programming. This takes a lot of time, especially when having to keep working a "real" job.

Early Access is not something I take lightly. I have carefully decided on this path not only because it works for me as a developer, but because I believe I can do it in such a way that benefits the players too.

If there is something I haven't made clear below or you have further questions, please feel free to get in contact with me via the appropriate twitter or email contacts.

By releasing via Early Access, I can take full advantage of community feedback to enhance the game with the right modes, customisations, difficulty and of course character balance to make the play experience from front to back all the better. So far, testing has been relegated to a relatively small group of players, although they do span a huge range of game playing experience!

Whilst I'm working hard to make sure there will be significant single player content in ZONERS, there is no doubt that this is a game that shines brightest when playing with friends. I'd love to officially introduce a dedicated online component to the game in addition to the robust local play options, but until an active player base exists and I have acquired sufficient funds to bring in outside expertise for, hopefully, a quality rollback netcode implementation (and even more hopefully, via cross-platform play in a "good end" future), players will be able to take full advantage of the Steam Remote play functionality.

I fully believe that players should be rewarded, not penalised, for supporting a game early into it's development cycle. As such, ZONERS will be released on Early Access at a much reduced price and then I plan to gradually increase the price as major content and features is added to the game.

Depending on the goings on in my life and the type of content being worked on, the pace and size of updates will vary, and will likely be more in line with monthly, rather than say weekly for example. One thing I can promise with certainty, is to keep players up to date on progress between patch notes.

As you can hopefully see even with just the main reasons, an Early Access release is something that I think can benefit me and players alike in a myriad of ways. Whether you choose to opt in, wish list the game or just decide it's not for you, thank you so much for giving ZONERS and by extension, me, a look in!”

“As a largely solo developer and considering the ongoing state of the world we live in, it is hard to give an accurate estimate of this. However, if all goes as planned, I believe the game should leave Early Access about a year after launch.”

“Below is a complete list of features and content I feel the final version of ZONERS is most likely to have. It is within the realms of possibility that some of the more "aesthetic" features are added after v1.0. This will depend greatly on development speed.

Please note, that it is entirely possible that the things listed here will be taken away or added to during the course of development. These are not promises, but they are genuine goals

“I fully believe that players should be rewarded, not penalised, for supporting a game early into it's development cycle. As such, ZONERS will be released on Early Access at a much reduced price and then I plan to gradually increase the price as major content and features is added to the game.”

“I will be directly engaging with the community via the Steam Community boards, Twitter and Email during development to try and make ZONERS the best it can be.

I cannot possibly include everything everyone wants, but community feedback on requested modes and features will be used to determine the prioritisation of these where appropriate.

Character balance will of course be an ongoing hot topic in a game like this, and by engaging with players verbally and statistically, I can better ensure a more balanced experience.

Accessibility is particularly important to me so that different kinds of players can experience the casual and competitive spectrums of action in a number of ways. As a long time game player without any major disabilities, it will be necessary to develop these features in conjunction with player feedback to make sure they work as intended and without intruding on the experience or being overly convoluted to setup.”
Read more
This game is not yet available on Steam

In a parallel universe, in the distant future, in a Milky Way both familiar and not, the king of the galaxy, King Klianc IX, has let it be known that the next ZONERS Galactic Cup is approaching fast.

So now, the greatest gather once again to compete for the ultimate prize: A single wish of their choosing, to be granted by the cosmic King himself! With the fate of anything & everything up for grabs, it's well and truly...TIME TO GET INTO THE ZONE!

ZONERS is a fast paced, 1-on-1, Competitive Sports Action game, that aims to please casual and hardcore players alike!

Strike the ball with your melee, projectile, super and hyper moves, or dash to close the distance and activate a parry for a last second save and score in your opponent's goal. Keep scoring quick enough and you'll get rewarded with extra points and maybe even a satisfying Zone Break. But don't let your guard down or give up, as the double scoring extra time, a shield tearing Hyper move or even a catastrophic own goal could flip the tables at the last second!

Featuring an eccentric cast of unusual characters to play as. From Urnest the old man trapped in yo-yoing 10 year old form as a ghost and the last human left, to a mad pinball collecting crab called Crabhammers, complete with a flying pinball bumper vehicle, to the mischievous scientist fairy Ringressa, whose research on portals continues to hide her mysterious lower half, to the genderless, sentient goo known as Gluup, that just really wants to give you a hug...explosively! 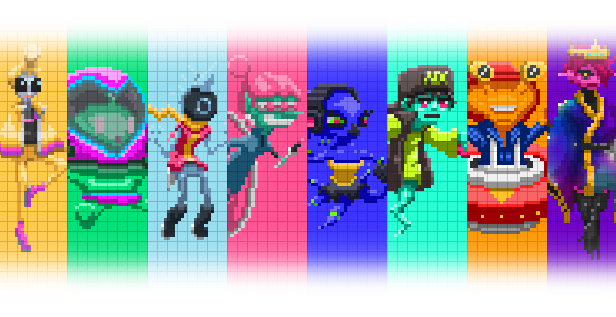 NOT QUITE THE GALAXY YOU KNOW...

It might be the Milky Way galaxy, but it certainly isn't the one you know. A rich world of silliness lies before you, with little details to discover. Stages take place in all manner of weird and wonderful locations, and a central menu hub to navigate in the ZONERS HQ means ZONERS isn't just about the tight, chaotic gameplay.

Every character shares the same simple inputs, but has access to wildly different stats, spins and abilities. Focus and timing can mean the difference between a score topping Zone Break or a heart-breaking own goal! It might look like tennis, yet with every character having access to ranged moves in their arsenal, there's always an opportunity to keep on the pressure. How do you break your opponents line when every character is over powered?

A wealth of profile based accessibility options that can be accessed in any mode and will develop even further alongside community feedback makes sure that players of not only different skill levels, but physical capability can easily jump in and have their fun with as little hassle as possible!

Further more, with the ability to create and save your own custom rulesets, there's almost endless fun to be had. From basic mode settings like time or score rule sets and round numbers or lengths, to more wacky changes like directional based ball gravity and even multi ball, you're sure to find something to tickle your fancy! 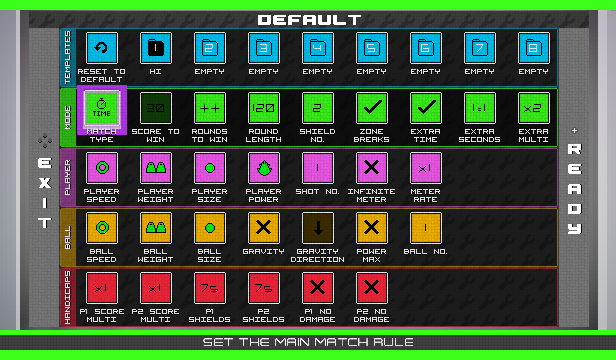 ZONERS is mostly the work of one person, Paris Stalker, featuring fantastic original new music from a range of specially handpicked artists such as CRYSTALBOY, RoBKTA & Steve Mantra, and quality SFX from Max Newton