This content requires the base game Dominion on Steam in order to play.

This content requires the base game Dominion on Steam in order to play.

“There’s a lot more to consider and keep track of in Dark Ages, which moves Dominion out of “gateway” territory.”
I Slay The Dragon

“I really love the idea of the Knights. Rats are delightfully weird. There’s a LOT going on, here.”
What's Eric Playing?

“It has all these new ideas. I like the three new starting cards.”
Dice Tower 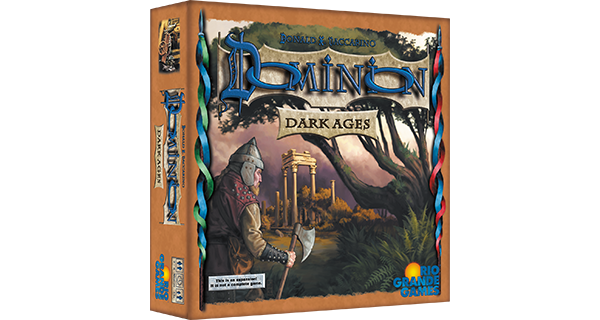 Dark Ages is the sevetth expansion to Dominion. It adds thirty-five new Kingdom cards to Dominion, plus new bad cards you give to other players (Ruins), new cards to replace starting Estates (Shelters), and cards you can only get via specific other cards. The central themes are the trash and upgrading. There are cards that do something when trashed, cards that care about the trash, cards that upgrade themselves, and ways to upgrade other cards.

Times have been hard. To save on money, you’ve moved out of your old castle, and into a luxurious ravine. You didn’t like that castle anyway; it was always getting looted, and never at a reasonable hour. And if it wasn’t barbarians it was the plague, or sometimes both would come at once, and there wouldn’t be enough chairs.

The ravine is great; you get lots of sun, and you can just drop garbage wherever you want. In your free time you’ve taken up begging. Begging is brilliant conceptually, but tricky in practice, since no-one has any money. You beg twigs from the villagers, and they beg them back, but no-one really seems to come out ahead. That’s just how life is sometimes.

You’re quietly conquering people, minding your own business, when suddenly there’s a plague, or barbarians, or everyone’s illiterate, and it’s all you can do to cling to some wreckage as the storm passes through. Still, you are sure that, as always, you will triumph over this adversity, or at least do slightly better than everyone else.

Dark Ages defies the previous scope of Dominion in several ways. It adds the only cards that cost $1 (Poor House and Shelters). It adds Supply piles containing various cards rather than an identical stacks (Knights and Ruins). It adds a Kingdom pile with twenty rather than ten cards (Rats). Overall, Dark Ages is known for its paradigm breaking content.

Dark Ages will challenge intermediate and advanced players, and represents a formidable undertaking for those new to Dominion. While some expansions give cards that are generally OK in any scenario, Dark Ages contains cards that require skill to play optimally and advanced planning to trigger combos.

While the set has a healthy learning curve, Dark Ages polled to be the forum favorite expansion. Not only is it a very large set, many of the cards offer a replayable challenge to master. Entire strategies are built around individual cards.

Replacing starting Estates, Shelters add a little variety and function to the players starting deck. Very little. They are starting cards after all.

Looters is a new type which distributes Ruins to players' decks. Ruins are generally junk and clogging up opponents' decks can extend the game. While usually longer games favor engine heavy strategies, those engines that get bogged down in Ruins will have a hard time starting. Because the Looter Cultist chains with itself, players can speedily destroy opponent decks faster than a typical Curse attack could. Dark Ages is notably the only set without a Curser.


Trashing
To spare players from complete ruin, Dark Ages introduces some of the most powerful trashers.

Unusual cards
Some Dark Ages cards are set far apart from those in other sets because of their distinctive strategies.