“Malfunction II has been a long-going project in the works that I've been extremely passionate about and am absolutely excited for the community to play themselves.

However. There is still quite a lot of work to be done. Releasing Malfunction II as Early Access not only will be significantly helpful in terms of community interaction and anticipation for future updates and additions to the story; but it will also allow the community to partake in Malfunction II's development as a whole.”

“Depending on the direction Malfunction II will take, you can expect it to stay in Early Access for no longer than 2 years (1 year at the minimum).”

“The full package of Malfunction II is planned to be quite robust. Featuring 3-5 chapters in total (still undecided), 5 levels per chapter. You can expect each chapter to explore an entirely new environment while also introducing new enemies, characters, and new ways to interact with the worlds around you.

However in the process of releasing chapters, it wouldn't be far fetched to expect some extra content additions along the way. Some of the most notable additions would be cosmetics, additional areas to prior levels, and more accessibility depending on the community's recommendations.

The main goal I'm aiming for though is to complete and polish the story. Once this goal is reached, Malfunction II will exit Early Access.”

“Currently with over a year of development, Malfunction II's main core mechanics are already in place and very polished.

In terms of content the ENTIRE first chapter is already completed, featuring 5 levels. (Which could roughly take about an hour or more to complete)

The game itself is VERY accessible in it's current state. It includes MANY improvements over the first Malfunction including faster mode switching, the ability to switch modes without locating your frame, material requirements are no longer needed, and also the addition of key bindings and various settings to help improve your gameplay experience.”

“There are currently NO plans to increase the price.”

“The community's feedback is super important to me and will have a HUGE role with Malfunction II's development.

I will take any ideas, recommendations or suggestions you might have to make the game a better experience. Want to take part? Reach out to me! Whether it's through the Malfunction II forums, Barlock Games' Twitter, or email, I will be checking all of these on the daily! So please don't hesitate to reach out if you have something you'd like to discuss.” 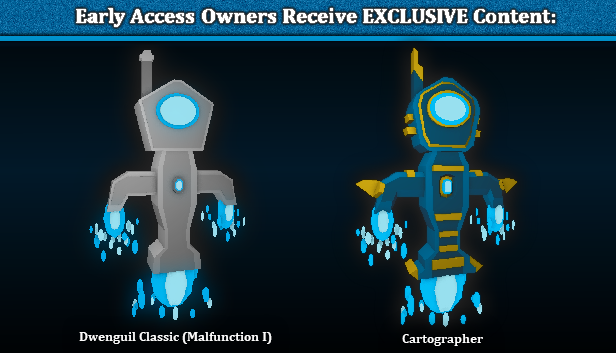 Malfunction II takes place several centuries after Malfunction I. Featuring a beloved character from the first game; Dwenguil. You'll once again step into his shoes as he's awoken on a mysterious planet which has been long overtaken by the Plague. However. The Plague aren't quite the same as they once were. The Plague has unexpectedly went rogue on it's creators; causing a huge threat to the entire universe. Dwenguil must yet again strategize a solution to stopping the Plague- for good this time.

Malfunction II will keep the formula you know and love (puzzles, exploration, combat) and improve upon it. Featuring new character modes, new combat techniques, new lush environments to explore, and MANY new puzzles to overcome. Malfunction II is by far the biggest and most innovative project that Barlock Games has ever made.

(As of right now)