“We are a very small and experienced development team but as this is an entirely unique concept we would greatly appreciate community feedback to help the game reach its full potential.”

“We estimate a 1 year development cycle to move the game out of early access and into release.”

“Story missions, narrative logs and a company reputation system. Additional contract types and game modes such as a sandbox mode and time trialed courses for your custom tuned ship to compete for the top spot on the leaderboards. Many more modules to help tune your ship and tailor it to be your customized rock hauler. More elements to process, more rocks to haul and more hazards to overcome.”

“We’re expecting to increase the price for our stable 1.0 release.”

“We hope to use community feedback on the Steam forums to help us develop lots more interesting and creative modules and new game modes to make use of your customized ships.”

The year is 2150. You’ve successfully landed a job working for one of the many mining facilities stationed in the asteroid belt between Jupiter and Mars. Using a company issued Asteroid Hauler, your job is to search for mineral rich asteroids and tow them back to the primary mining facility for further processing.

Pre-fitted or built from scratch the control layout, types and operations are assembled using a fully player modifiable node based system of simple single function components. Don’t like the position of a control? Move it, change it or remove it. This is your ship so it’s your choice!

All components can be connected using red cables which simulate power distribution and green cables which simulate data flow from user input and various sensors. Using the modules and data systems you can wire the ship how you want it. Want to fly with proximity sensors only? Wire it up and off you go… but good luck!!

Use the controls you built and wired or a pre-fitted ship to haul asteroids and complete contracts or just have some fun flying about in space dodging rocks.

Be warned, this trivial sounding job will push you to your creative engineering limits. The asteroid belt is extremely dangerous, radiation and cosmic rays will continuously degrade the components of your ship. Over the course of your employment you will need to become intimately familiar with how all ship systems operate and fit together so that you can rearrange, rewire and reprogram them as they fail around you. You’ll need to get creative to survive and get your payload back to the primary mining facility. 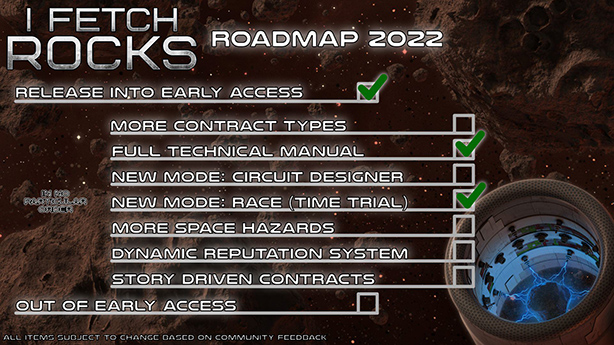