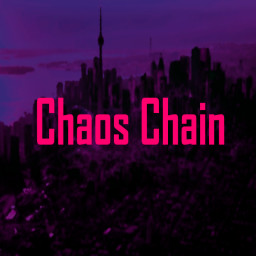 “Early Access will allow the project to gain valuable player insight, facilitate community engagement, and will let you play the game throughout it's creation period. During this time, players have a chance to have their voices heard on what they would like to see in game.

We have done this with four previous titles and they have all been fully developed and completed. For more information, please see our product listings here: https://store.steampowered.com/curator/6836576

***Please only purchase the game in its current form if you're willing to deal with bugs, occasional progress resets, unfinished content, you're excited to get involved, and/or to play it now!***”

“Chaos Chain will likely be in Early Access for at least a year from the time of its initial release. That time may fluctuate a bit, but that is a fairly accurate approximation. It just all depends on how things go. The main goal is to deliver polished content, so bug fixes will always be the number one priority.

Depending on the amount and size of community requests, this time may extend further to compensate and include things as development goes on.”

“The final full version of Chaos Chain will feature a completed storyline, a variety of side activities and quests, more enemies and factions, more locations to explore, much more diversity in equipment options, further balance and polish, and so on. Nothing is final until the day of full release so it can be continuously upgraded and improved throughout the development cycle. Steam Cloud will also be available upon full release.”

“Update as of 3/17/22
-Cyberware system, new skills, the companion system, the first companion, more side quests, new areas to explore, new music, new equipment and gear, refined UI and improved dialogue system, even deeper roleplaying opportunities, and SO MUCH MORE are now in place. Please see the recent announcements for the game to see a complete list of all the new content.

Chaos Chain is still early in it's development, but a lot is already completed.

The game's foundation is complete and many of the systems are already fully implemented (but are still subject to change) and working. The character creation process has a lot of depth already, but may also be improved further with more customization options. The backstory, tutorial, and intro are written, the game world already has a lot of interesting lore, and there is already a fair amount of content to experience.

There will be unfinished content and bugs during the Early Access stage, but these will be fixed by the time the game reaches final release to bring the best possible final product.”

“The pricing of the game will reflect the amount of content, polish, and completion of the overall project. It is planned to increase slightly upon final release. Buying early will allow you to play the game as it is updated and get you a discounted price and allow you to contribute ideas towards development if you choose to participate.

This is the same direction that we have had much success with in the past with our previous titles.”

“As with our past games, we invite and encourage our players and community to post their ideas and suggestions for improvement on the game's community hub forums! If you have a request that fits with the vision of the game, it is highly likely to be added!

If you find bugs, please consider posting bug reports on the forums as well so they can be fixed in the next patch!

You can find those forums here: https://steamcommunity.com/app/1536730/discussions/1/

You're also more than free to discuss the game and ask general questions about it here: https://steamcommunity.com/app/1536730/discussions/0/”

Combat hacking, QOL improvements, bugfixes, a new side quest, and a lot more in the newest update!

"Chaos Chain is a large project being created by a single developer. Some features may not be fully implemented or available during Early Access. Please refer to the Early Access Game Information section at the top of the store page description for further information."

"Half a century into the future, mankind's world is riven and in a state of great social, political, and economic strain... After the end of the horrific pandemic that haunted the early twenties, big pharma became stronger than ever seen before. Medical research thrived and allowed for a multitude of tech advancements, but healthcare prices skyrocketed, causing mass inflation and shifting the world's economy... As a result, cryptocurrencies grew in popularity and eventually gained enough momentum to replace other monetary systems across the globe... Greed, hatred, envy, and panic then fueled the fires of war time after time, leaving the world scarred and broken. The U.N. has fallen and the war on terror has failed. Civilization is slowly collapsing in on itself... Now, most people cannot afford their basic needs. Society is fragmented and has dissolved back into a rigid caste division. Crime is at an all-time high and poverty is the new norm. Each day that passes, exploitation of the Earth's resources continues and pollution intensifies, making life even more unbearable... Humanity is in the darkest place of its entire existence... A dark place where you exist."

Buried in debt to a notorious loan shark, you're forced to plunge into the shadows of a dark underworld filled with danger and betrayal around every corner. You'll need to decide who you should trust, who to spite, and how to stay alive.

Harsh language, implied drug use, and other general mature content.