“We want to gather feedback about the realism of the game and in which direction should it evolve - more realistic or more arcade? We want to balance the game according to the players feedback - especially in terms of online game. We want to polish our second main mode which is Team Mode - where you control the whole team.”

“You can play Solo Mode (controlling one player), play Career and Friendly Matches within early access. Online and offline matches are available.”

“The price at full release will be slightly increased.”

Are you ready to experience something fresh in the football video games genre? Don't let the game's cartoonish graphics deceive you! Let us surprise you with realistic characters' movement, kicking and real ball physics.

Creating this game, we wanted to move to the screen all these emotions that accompany playing with your friends on a small field in real life - the freedom of movement, constant looking out for a free position, dynamic gameplay.

Play friendly matches online or local in front of one screen with your friends.
Play against AI in the league and gather the in-game coins. Use them to buy new team members in the Team Mode or boost up your own, designed by yourself, footballer in Solo Mode. You can also buy new outfits, unlock stadiums, and customize the appearance of your character!

This Steam Early Access game is currently not a finished game and may or may not change significantly over the course of development. To learn more about Steam Early Access, please visit http://store.steampowered.com/earlyaccessfaq/ 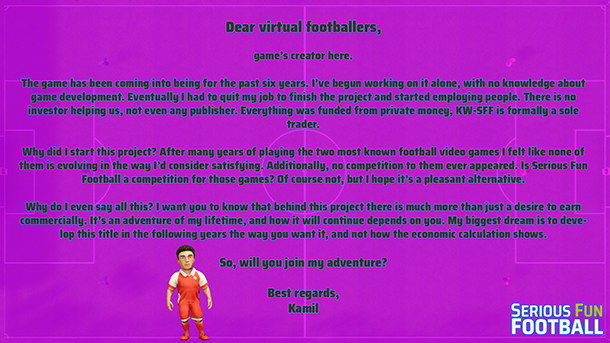